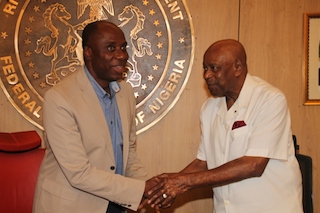 As the controversy deepens over who owns Soku oil wells between the Rivers State Government and the Bayelsa State Government, former Nigerian Minister of Petroleum Resources, Professor Tam David-West,has waded in, declaring that the wells belong to Rivers State.

Professor David-West, an indigene of the state, from the Kalabari Kingdom, where the oil wells are located, also stated that his people are prepared to fight the Presidency over the ceding of the wells to Bayelsa State at every level, stating that no part of Kalabari Kingdom will be allowed to be ceded to any other part of the country.

He revealed that the Kalabari oceanic communities of Kula, Soku, Idama, Elem-Sangama and Abisse have been existing for over 300 years of Kalabari history in Rivers State.

David-West disclosed this on Friday when he led a delegation of Kings, Chiefs, Elders, youths and representatives of the Oceanic Communities of Akuku-Toru local government area in Rivers State on a solidarity visit on the Rivers State Governor, Rt. Hon. Chibuike Rotimi Amaechi in Port Harcourt.

According to him, the delegation cameto thank Governor Amaechi particularly on what he has been doing for the Kalabari Kingdom. He regretted that some of the leaders of the Kalabari ethnic nationality don’t understand this.

On the travails of the Governor, the Professor of Virology said “I know what you are going through. But why should an Ikwerre Governor be sacrificed, for saying that Kalabari Communities should no be ceded from Rivers to Bayelsa State.

Tam David West said the Kalabari people need to support such person and carry him high. He recalled that “When Nnamdi Azikiwe came to Port Harcourt, I remember, we carried him and I think, every kalabari person should be carrying Amaechi high to replicate the kind gesture”.

He said that anyone that is dismantling it now, whether from Borno, Kaduna, Sokoto or Bayelsa State, will never succeed. Our ancestors fought also with Canon guns to protect these territories, but, at this time, we have other implements to fight the struggle.” David-West said.

He described the attempt by some Kalabari chiefs to sign a secret document to cede the Oceanic Communities to Bayelsa state as a ploy to distort facts that have genuine historical antecedents since the period of the colonial era.

David-West said, “Truth only has one version, all the time they are shifting the boundaries to their favour with some Kalabari Chiefs, who were secretly approached to sign documents to cede all these territories to Bayelsa state. But, they cannot change the fact that, the controversial oil well territories belongs to the Kalabari people.

“This is because, if you plan evil or attempt to ruin the Kalabari land of its natural resources, the gods, our ancestors will not allow you. Bayelsa state was created in 1996, and the boundary was created between us at the Santa Barbara River. It has now been moved to the San Bartholomew River. If they allow that, then, Abonnema and Idama will be in Bayelsa state. This is what is coming and I tell you stop it now, because God will not allow it to happen. We must go back to the colonial boundary which was impartial. If you rig election to be in office, tomorrow, you may not be there, but these records will be there forever. And, it is left to us Kalabari sons and daughters to support all those fighting for our cause. And, fight with all that we have to stop this nonsense. It is nonsense and I owe no apology to it because, it is nonsense. Any person who wakes up any morning that he is going to acquire territory owned by people by fiat is nonsense. This is because; they can never get it, even with their pen. One oil well is a billion naira, and we are talking about 41 oil wells”, he said.

Professor Tam David-West while commending Governor Amaechi picked holes with President Jonathan over his style of leadership, which he said, was calculated to deprive the Kalabari people of their natural resources.

“So, I think, we owe Governor Amaechi a chain of gratitude for agitating severally that, this is my territory, I am the Governor of Rivers State and, I will not concede to cede any territory from the state to anybody. You swore by the Bible, when taking the oath of allegiance to protect the territorial integrity of the state.

Professor David West stated categorically that he has nothing against President Jonathan, but that he hates the style of his leadership and has no apologies for it.

He said he will not support somebody who wants a political office because he is an Ijaw man, but will only support such person, only when that person is good.

The Professor recalled at the time President Jonathan was schooling at Imiringi at his young age,he was a serving commissioner in Rivers State. “I am not against him, but, I am particularly against everything about his government and leadership, especially, his style of divide and rule system. He will not succeed. I have told his brother who is a fantastic engineer to tell President Jonathan that, I will not pull him down, but, if I see people pulling him down, I will not stop them, because, he is not doing well.

“And, I want him (Jonathan) to tell us the kind of legacy he wants to leave behind after his tenure. What I want to tell President Jonathan is that, let him leave the Kalabari territory and the oil wells alone. I am also told that, they were planning to create another state out of Bayelsa state. But, when they looked at it, the population was too small, and now, they have considered taking in Abonnema and Idama communities as part of Bayelsa state. It will not happen”, Professor David-West said.

The former Petroleum Minister further commended Governor Amaechi for all the numerous projects his administration offered to the people of Rivers State, and urged him to ensure communities at the grassroots feel government presence.

Governor Chibuike Rotimi Amaechi assured the people of the Oceania communities that his administration will work towards the completion of all ongoing projects as a means of showing government presence in the area, and further urged the people to vote out PDP in 2015 to get back their oil wells from Bayelsa State.

According to him, “The question you should ask yourself is where are we going to? And what you need is to vote out PDP in 2015, and be assured of getting back your oil wells”, Amaechi said.