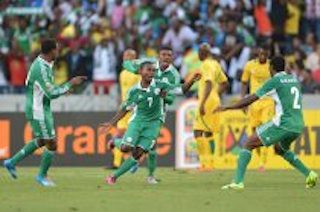 A brace from Ejike Uzoenyi and a penalty goal from Ede Ifeanyi ensured that Nigeria’s Super Eagles proved critics wrong and stopped the hosts as they cruised into the quarter finals of the African Nations Championship, CHAN, in the last group match decided at the Cape Town Stadium, South Africa Sunday night.

Uzoenyi’s first goal came in the 22nd minute, Ifeanyi scored his penalty goal in the 32 minute, while Uzoenyi made it three for Nigeria in the 63rd minute. South Africa’s only goal was scored by Bernard Parker after an infringement in the Nigerian box in the 81st minute.

The match began with South Africa making effort to draw the first blood with intense attack, but Nigeria’s goalkeeper, Chigozie Agbim came out to cuddle a cross from the left.

Even a shot at goal by Bafana Bafana’s striker, Bernard Parker was dealt with by goalkeeper Agbim.

Nigeria then settled into this crucial match.

A sixth minute free kick taken by midfielder Siphiwe shabalala was palmed away to safety by a born again Agbim.

Nigeria’s first attempt at goal came in the eighth minute when Rabiu Ali collected a loose ball, but his shot from outside the box sailed out of touch.

Another big chance came the way of the Eagles in the 11th minute through Ifeanyi Ede who slide in to get a touch to Azubuike Egwuekwe’s shot, but he failed to convert his chance.

Nigeria looked assured even back in the defence and upfront their pace was troubling the Bafana backline.

Mother luck however smiled on the Nigerian side who were determined for an outright victory in the encounter when Ede set up Uzoenyi and he delightfully swept the ball past the Bafana goalkeeper, Moeneeb Josephs to score his first international goal for Nigeria in the 22nd minute of the game..

The goal silenced the hosts’ fans as the noise level at the stadium went down considerably after the Nigerians’ opening goal.

A penalty kick came for Nigeria in the 32nd minute when goalkeeper Joseph of South Africa spilled the ball and in an attempt to win back possession, tripped Gbolahan Salami inside the box.

The Bafana goalkeeper guessed right and even got his hand to the shot, but Ede Ifeanyi’s penalty kick was strong enough to find the back of the net to give the Eagles their second goal of the night. They took the lead into the half time.

Nigerian team restarted the second half with the confidence of two goals in their kitty.

Nigeria’s Ifeanyi ensured that he continued harassing the Bafana defence.

Bafana made spirited effort to score a goal in the 62nd minute through Mashego, who made a goalbound shot but it was clawed away by Agbim.

Ejike Uzoenyi compounded the woes of the hosts when he fired in a shot at goal in the 63rd minute to give the Nigerian team their third goal.

A shot that hit the cross bar denied Uzoenyi his hat-trick in the 71st minute.

A consolatory goal came for South Africa in the 80th minute after Uzochukwu brought down Parker inside the box and referee called for a penalty kick which Parker scored in the 81st minute.

The referee blew the whistle after four minutes added time.

Mali beat Mozambique 2-1 to top the group, while Nigeria finish second and Bafana crashed out.