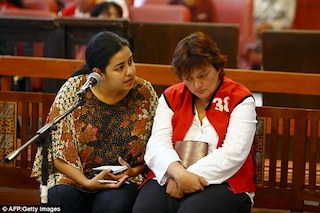 A former British police community support officer Andrea Waldeck, jailed for 14 years in Indonesia after pleading guilty to smuggling crystal meth into the country, has blamed a Nigerian gang for making her traffic in the drug.

The 43-year-old former PCSO with Gloucestershire Police had previously admitted trafficking the drug, often referred to as ‘ice’, worth more than £3,000, into Surabaya, Indonesia’s second largest city, in April last year.

Waldeck had earlier heard prosecutors demand a sentence of 16 years, so when the verdict was handed down by three judges her reaction was not unexpected.

Presiding Judge Faturrachman, said: ‘Andrea Waldeck has been proven legally and convincingly guilty of offering to sell or become a middle person to sell drugs.’

Her immediate reaction was to tell her defence team through an interpreter that she would ‘take time now to consider the verdict, my future and whether I should appeal.’

Dressed in a red prisoner’s bib and clutching a Bible, she was then led from the court to begin her sentence.

She had earlier told the court that smuggling 3lbs of crystal meth into the country last year was the most stupid thing she had done in her life.

‘I’ve let down my country and my family,’ she told the earlier court hearing this month.

Indonesian reporters said Waldeck was very lucky to have received a sentence two years lower than that demanded by the prosecution.

Waldeck blamed her ‘state of mind’ at the time which led to her bringing the 3lbs of ice into the country, resulting in her arrest when police raided her three-star hotel Surabaya hotel.

Her defence team had also argued that she had carried the drugs, worth £3,000, into the country under duress after being threatened by a Nigerian man in China who had told her that people from his country ‘killed people’.

The judicial panel was also told that Miss Waldeck was not a high player in the drug syndicate that existed in China and that she had received no reward for carrying the drugs when she flew in April last year from Guangzhou to Surabaya, where she was today sentenced.

Miss Waldeck, originally from Talgarth in Powys, served with the Gloucestershire police as a community support officer before leaving the force in February 2012 to travel across the world to China.
It was there that her life began to fall apart.

“She said the man had told her: ‘I’m Nigerian. You know about Nigerians. We kill people.”

She told police and her lawyers that she had intended travelling to Indonesia from her base in the city of Guangzhou to set up a furniture import-export business.

But she said she had fallen in with the wrong crowd and a Nigerian friend threatened her if she did not agree to carry the crystal meth when she set off on her planned business trip to Indonesia.

She said the man had told her: ‘I’m Nigerian. You know about Nigerians. We kill people.’
Police sources said they were tipped off about the drugs Miss Waldeck was carrying but waited until she had checked into a three star hotel in Surabaya.
She was making a phone call to a contact she had been told to ring when police raided her room.

There they found the crystal meth – ‘ice’ – in black plastic bags that she had previoius packed in her underwear to pass through customs.

It is understood that a key player in the drugs syndicate who was to receive the drugs in Surabaya is still on the run.

Indonesia has some of the harshest anti-drug laws in the world and recently announced that it was planning to execute 10 death row prisoners every year.