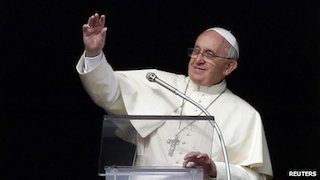 Pope Francis described the Internet on Thursday as “a gift from God” and called on Catholics to “boldly become citizens of the digital world”.

“The internet… offers immense possibilities for encounter and solidarity. This is something truly good, a gift from God,” the Argentine pontiff said in his first World Communication Day message, given annual by the pope.

“Let us boldly become citizens of the digital world. Let our communication be a balm which relieves pain and a fine wine which gladdens hearts,” he said.

But he also makes a point of privileging human relationships and physical touch, often walking among the crowds who flock to see him in St. Peter’s Square and embracing the ill or disabled.

“As I have frequently observed, if a choice has to be made between a bruised Church which goes out to the streets and a Church suffering from self-absorption, I certainly prefer the first,” he said.

“Those ‘streets’ are the world where people live and where they can be reached, both effectively and affectively. The digital highway is one of them, a street teeming with people who are often hurting, men and women looking for salvation or hope,” he added.

However, Francis warned people not allow the desire to be connected to the digital world twenty-four hours a day to isolate them from society.

“It is not enough to be passersby on the digital highways, simply ‘connected’. Connections need to grow into true encounters,” he said.