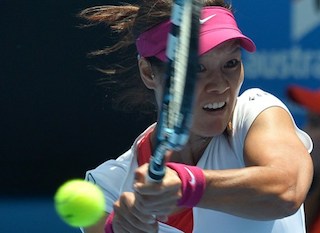 The 20th seed was in inspired form to rip the Pole to shreds 6-1, 6-2 and not only make her first grand slam final in 26 attempts but also become the first player from her country to get so far.

Li had earlier advanced to Saturday night’s final with a 6-2, 6-4 win over Canadian teenager Eugenie Bouchard.

“Aga is an unbelievable player and I expected a tough match. I just knew I had to go for my shots,” said the 24-year-old, who has won three career singles titles, including at Stanford last year where she beat Radwanska in the final.

“I had so many thoughts in my head (during the match) but just focused on my game. I can’t believe I’m in a final.”

On paper, Poland’s Radwanska was the clear favourite after beating the Slovak, an old foe she has been playing since they were nine years old, in five of their six WTA meetings.

But she was a shadow of the player that beat two-time defending champion Victoria Azarenka in the quarter-finals, unable to get in her groove on Rod Laver Arena with Cibulkova hardly putting a foot wrong.

Before her win on Thursday, Cibulkova had been to the semis of a grand slam once before, five years ago as a 19-year-old at the French Open.

The short but punchy 20th seed, who ended Maria’s Sharapova’s tournament in the fourth round, said before the match that she was now more mature and ready to take the next step.