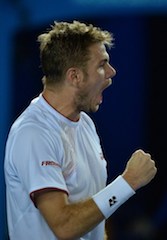 The eighth seed will play either Rafael Nadal or Roger Federer in Sunday’s final.

Wawrinka, who upset three-time defending champion Novak Djokovic in the quarter-finals, supplants Federer as the Swiss number one by making the final. Federer has held the top Swiss ranking since 2001.

“I’m speechless, it’s amazing. I am so happy to win that match to make my first final here,” Wawrinka said.

“I am working every day to try and win matches. I didn’t expect to make a final in a Grand Slam and tonight it’s happened, so tonight I’m really happy.”

Wawrinka didn’t lose serve and only had one break point against him as big-serving Berdych dished up seven double faults, four of them, crucially, in the third and fourth set tiebreakers.

Berdych’s serve was only broken once and Wawrinka shaded the Czech by just one point (143-142) throughout the whole match.

Wawrinka, who lost to Djokovic in five sets in the semi-finals at last year’s US Open, has now reached a major final at his 36th Grand Slam appearance, and becomes only the second Swiss man behind Federer to play in a slam final.

It was Wawrinka’s fourth straight victory over Berdych and his second win over the Czech in three Slams.

Wawrinka won the opening set when Berdych missed an overhead smash on break point in the seventh game, but the Czech levelled the match by taking the second-set tiebreaker.

Both players were unable to break serve and the semi-final was decided with Wawrinka winning the final two tiebreakers to edge home.

Wawrinka hit 18 aces among his haul of 57 winners and won 82 percent of his first-serve points, the same as Berdych.