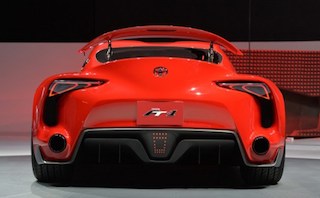 The Japanese auto giant’s highest-ever annual sales volume came thanks to a weaker yen as well as strong US and China sales, signalling it had recovered from a series of damaging safety recalls and Japan’s 2011 quake-tsunami disaster.

Toyota broke GM’s decades-long reign as world’s top automaker in 2008 but lost the crown three years later as the quake-tsunami hammered production and disrupted the supply chains of Japanese automakers.

However, in 2012 it once again overtook its Detroit rival, which sells the Chevrolet and luxury Cadillac brands. GM’s strong results come after it emerged from bankruptcy and a government bailout during the 2008 global economic crisis.

Toyota, maker of the Camry sedan and Prius hybrid, also said Thursday it expects this year to become the first automaker to break the 10 million vehicle sales barrier.

That growth would be driven by overseas demand — Toyota expects volume at home to slip 5.0 percent this year as consumer demand takes a hit from an April sales tax hike.

“They have maintained that balance well, compared to its rivals,” he said.

“Toyota should have reached the 10 million mark sooner if they had not faced major negative factors like the impact of the quake disaster and flooding in Thailand.”

But he warned that the auto giant should not get complacent, adding: “If they only pay attention to production and sales figures, they could lose their competitive edge and wind up in trouble.”

The sales figures cap off an impressive comeback for Toyota, which took a heavy blow from a series of mass recalls affecting millions of cars that damaged its once-stellar reputation for quality and safety and led to US congressional hearings in 2010.

The firm has said it expects a net profit of 1.67 trillion yen ($16.02 billion) in the fiscal year to March thanks to a sharply weaker yen and improving sales in North America.

Toyota has ramped up its drive to tap emerging markets while key US demand has also been on the upswing, helping the firm book ever-increasing profits with its half-year earnings surging 82.5 percent.

Japanese industry has benefited from the big-spending and easy-money policies of Prime Minister Shinzo Abe, with huge monetary easing measures from the premier’s hand-picked team at the Bank of Japan helping push down the currency.