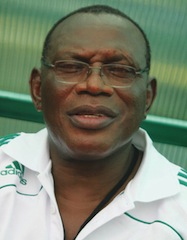 As Nigeria’s female U-17 and U-20 teams, the Flamingoes and Falconets continue their preparations for their upcoming FIFA World Cups holding in March and August respectively, Assistant Director in charge of women football in Nigeria Football Federation, NFF, James Peters has described local coaches as being lazy.

According to the former national team coach, most of the Nigerian coaches handling different national teams are reluctant and lazy to discover new talents, but continue to recycle old players for national assignments.

He said: “Our coaches are lazy. They don’t like to work hard and look for players that are abound in the nooks and crannies of the country. They would rather continue to use the same set of players for different tournaments.

“The present Falconets team are the same girls we have been parading since 2010.

Nothing is new about them. Our coaches need to begin to see hard work as a virtue, and not to always rely on cutting corners at every opportunity they are given to raise a team for the country.”