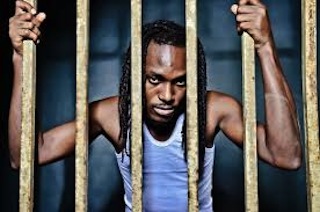 Port Harcourt-based veteran rapper, Lyrikal has released some photos of himself behind prison bars.

The 16 concept-driven photos are part of the rapper’s personal campaign to communicate the challenges of the average young person living in Nigeria today. He talks about prison life, freedom, oppression, success and religion

“Hip Hop is a form of self-expression that tries to challenge or merely evoke the mood of the circumstances of an environment. The bars are a metaphorical play on the musical jargon; where they represent a point in a verse which contains the punchline for a rap – this is why we used sixteen photos. But most importantly, the bars represent the physical oppression, mental captivity and creative limitations facing the Nigerian youth today,” said Lyrikal.

Lyrikal, born Jesse James, borrows quotes from William Glasser, Musiq Soulchild and Nelson Mandela among others in the expression of his call to freedom.

Lyrikal is many Nigerian Hip-hop listeners’ delight. The one-time Hip Hop World Awards’ Next Rated honoree has a mixtape OCD featuring a hit track Focus which he released recently.