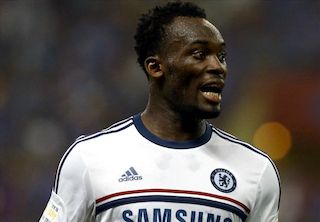 Essien, 31, arrives on a free transfer having signed an 18-month deal with the northern outfit placed 11th in Serie A, the Italian press reported.

Essien is the first recruit of new Milan coach Clarence Seedorf, and he could play in their Champions League last 16 tie against Atletico Madrid next month with two Milan midfielders suspended for the match — Riccardo Montolivo and fellow Ghana international Sulley Muntari.

He teamed up again with Jose Mourinho at Real Madrid (2012-2013) and headed back to England with the Portuguese coach to Chelsea this season, but has failed to feature for the English side.

“I can’t wait to play for Milan,” the Ghana international, 31, told reporters after landing in Italy on Friday. “Kaka and Balotelli are great players.

“I joined Milan because of Seedorf. I spoke with him two days ago. Seedorf is a great man and I hope that he will also become a great manager.

“I’m happy to be at Milan. They’re a great club. l will do my best for them.

“I want to thank [Chelsea chairman] Roman Abramovich, the squad and Mourinho, who gave me the chance to join Milan.”

Essien will be the latest expense-free arrival at Milan in the January window on the back of Keisuke Honda’s free transfer from CSKA Moscow and Adil Rami’s loan move from Valencia.

The Ghanaian is eligible to compete in the Champions League for Seedorf’s men – with Atletico Madrid in the last 16 their next obstacle – as he did not feature for Chelsea earlier in the campaign.

Milan have underperformed hugely this season and sit 11th in Serie A, scraped into the last 16 in Europe’s elite competition and were knocked out of the Coppa Italia in midweek.
WilliamHill

Earlier Friday, Chelsea also announced that they had agreed to sell Spanish midfielder Juan Mata to Manchester United for a fee reported to be £37 million.