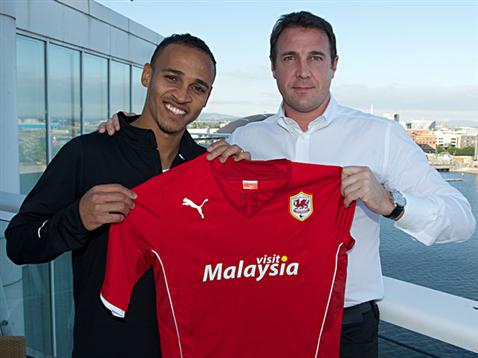 Odemwingie with Mackay when he joined Cardiff last September

Stoke City are closing in on a shock move for Cardiff striker Peter Odemwingie.

Mark Hughes wants to bolster his forward line this weekend and has identified the Nigerian as a target.

The move could also see Kenwyne Jones go in the opposite direction as Ole Gunnar Solskjaer seeks to add more firepower to their bid to avoid relegation from the Barclays Premier League.

Odemwingie, 32, joined Cardiff from West Brom back in September in a deal worth £2.25million, but he has managed just two goals in 15 appearances for the Bluebirds.

Jones, 29, is in his fourth season with Stoke and has a good return of five goals in 10 appearances this season.