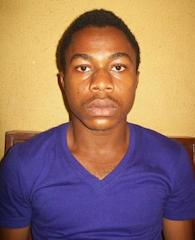 A Nigerian undergraduate student who used his tuition fee to buy hard drug has been arrested for drug trafficking, Nigeria’s National Drug Law Enforcement Agency, NDLEA, said in a statement on Saturday.

NDLEA said the suspect, Udiomeh Kufre Ita, a student of the faculty of Management Sciences at the Regent University in Ghana, was arrested at the weekend at the Murtala Muhammed International Airport in Lagos, western Nigeria.

He was caught with 1.745 kilogrammes of dried weeds that tested positive for cannabis popularly called hemp.

The suspect was found in possession of the drug during the inward screening of passengers on an Africa World Airlines flight from Accra, Ghana, said NDLEA Lagos Airport Commander, Hamza Umar.

“An undergraduate student was found in possession of two parcels of cannabis weighing 1.745kg during routine search of passengers. The drug was hidden inside his bag containing personal effects. He was immediately arrested and the case is under investigation,” Hamza was quoted as saying.

“The suspect who reportedly gained admission into the faculty of Management Sciences at the Regent University is currently assisting narcotic investigators assigned to the case,” NDLEA said in a statement signed by its spokesperson, Mitchell Ofoyeju.

In his confessional statement, Ita was quoted as saying that he used his tuition fees in purchasing the drug found on him.

“I spent my school fees on cell phone, smoking hemp and attending night clubs. I bought a cell phone for N107,000 and spent my school fees recklessly. I thought I could make enough profit from the sale of cannabis to offset the deficit in my tuition. I bought each parcel of hemp for 220 Ghana cedi. I did not know what came over me and I am afraid to go to my parents. My father is a retiree,” the suspect was quoted as saying.

NDLEA Chairman, Ahmadu Giade, has described the action of the student as shameful and sad.

“This is very shameful and sad. It shows that the suspect is morally bankrupt. Students must understand that drug use is inimical to the pursuit of their academic goals,” Giade was quoted as saying.

The NDLEA boss called on members of the public to avoid drug use and support the fight against drugs.

“Abstinence from drug use is the best solution but those who have problem with drug use should please seek professional help before it is too late. Let us support the anti-drug campaign for a peaceful and fulfilled life,” Giade was quoted as saying.

NDLEA said the suspect will be placed on counselling and may likely be charged to court for unlawful importation of cannabis.