The Herculean Task Before Adamu Mu'Azu 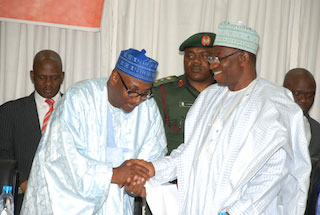 Mu'azu and Goodluck Jonathan after the swearing in

Alhaji Adamu Mu’azu, new PDP National Chairman, has the enormous task of restoring solidity to a party currently held together by scotch tape. Can he?

At the moment, the Peoples Democratic Party, PDP, is a credible imitation of an intensive care unit patient.

Though never wholly well, the party developed the equivalent of an organ failure under its immediate past National Chairman, Alhaji Bamanga Tukur, who has been named Chairman, Nigerian Railway Corporation by President Goodluck Jonathan. Tukur, a man always in belligerent mode, has been blamed for the biggest turmoil in the party’s history.

Tukur’s successor, Alhaji Adamu Mu’azu,  a former governor of Bauchi State, clearly has an emergency on his hands, with the party’s fortunes at an all-time low.

The lowest points are the formation of a parallel entity, the now defunct New PDP; the defection of five governors elected on its platform to the opposition All Progressives Congress, APC, and the loss of its controlling majority at the House of Representatives, the first time since 1999.

Last Tuesday, his first day at work, Mu’azu and members of the party’s National Working Committee, NWC, met to fashion out a reconciliation agenda they hope will ease the tension in the party. An important item on the agenda is how to bring back defectors into the fold.

To assure defected governors that the PDP means business, Mu’azu referred to the lifting of the suspension of Ibrahim Kazaure, National Vice-Chairman (North-west).

Already, Mu’azu has publicly apologised to governors, lawmakers and other members that defected to the APC and appealed to them to return to the party. The apology, a clear rejection of his predecessor’s method, was tendered during a visit to him by at the party’s National Secretariat by Governor Sule Lamido of Jigawa State. Lamido was a member of the new PDP but, along with Governor Mohammed Babangida Aliyu of Niger State, refused to join the APC when their colleagues did.

Mu’azu, who promised to look into the complaints of the defectors and other aggrieved members, urged Lamido to speak to the defected governors ahead of the delegation that the PDP is planning to send to them.

The Jigawa State governor blamed the NWC members, who were there with Tukur, for treating the defection with levity. “It is too bad that you, the NWC members, were saying no problem when governors and parliamentarians were defecting. But I am worried because the party’s primary goal is to keep winning. You (Mu’azu) must try to get them back,” said Lamido.

He was, however, quick to warn Mu’azu that he has a mountain to climb in his bid to bring the defectors back.

“The task of bringing them back will not be an easy one because ego is involved now. Their ego has been bruised, they felt insulted,  discriminated against, rejected and embarrassed by their own party,” the Jigawa State governor.

The scale of Mu’azu’s task was quickly brought into sharp focus. A statement issued by Chukwuemeka Eze, spokesperson of the defunct new PDP, foreclosed the return of the decampees to PDP. “For the avoidance of doubt, let me state unequivocally on the authority of the departed governors and other stakeholders of the defunct nPDP that none of us, including the G-5 governors, members of the National Assembly or any stakeholder of the defunct PDP, has any intention of rejoining PDP no matter the level of manoeuvring, coercion or enticement. We are not interested as we have left with the soul of PDP and Mu’azu can have the carcass of the party to revive if he has the ability,” the statement read. Governors Rotimi Amaechi of Rivers State and Murtala Nyako of Adamawa State have both expressed their unwillingness to return to the PDP.

Many analysts are of the view that Tukur’s resignation came too late in the day. For one, they observed that some of the NWC members that Mu’azu inherited supported the former chairman when he took certain decisions that contributed to convulsion in the party. This view is reinforced by the continued defection party members despite Tukur’s ouster.

Last Wednesday, 22 of the 24 members of the Kwara State House of Assembly, including the Speaker, announced their defection from the PDP to the APC on the floor of the House.

The lawmakers, in a letter read by Razak Atunwa, the Speaker, said their defection was provoked by the division  in the PDP.

The same day in Osogbo, Osun State, no fewer than 200 PDP members from Ifon in Orolu Local Government Area of the state, defected to the APC.

But beyond the drive to win back defectors, an issue that may soon resurface is that of  automatic tickets. Before Tukur’s resignation, the former national chairman promised automatic tickets to members of the National Assembly willing to re-contest. That promise added fuel to the fire in the various state chapters, especially in states where the governors are eyeing senatorial seats.

One of such is Enugu State, where Governor Sullivan Chime’s desire to replace Deputy Senate President, Ike Ekweremadu, has never been disguised. Ekweremadu is seeking a return the Senate. The situation is the same in Akwa Ibom and Abia states, where Governors Godswill Akpabio and Theodore Orji are getting ready to go to the Senate at the expiration of their terms.

There is also the no small matter of reconciling Governor Amaechi with President Goodluck Jonathan, a task that is certain to be made bigger by the dispute over the chairmanship of the Nigerian Governors’ Forum.

Amaechi, who defeated Governor Jonah Jang of Plateau State during the last election of the forum, remains unrecognised by the President, who continues to back Jang, the loser.

Mu’azu also has a big fish to fry in his geo-political zone, the North-east, where Tukur made so many enemies, some of who believe that his continued stay in office was inimical to their respective dreams of contesting the presidency.

How much of progress Mu’azu has made in rebuilding the party will soon be tested in Osun and Ekiti states, where governorship elections will hold in a matter of months. The wave of defections from the PDP has continued to encourage the APC to believe that it has a bright chance of turning the PDP over in the next general elections.

Mu’azu, sources said, was not the preferred choice of President Jonathan, but that of the chieftains, especially governors, who argued that only Tukur’s removal could salvage the party from doom in next year’s elections.

The President was later persuaded, following Mu’azu’s endorsement by Vice-President Namadi Sambo, Senate President David Mark and governors in the President’s corner of the party.

On emergence, Jonathan urged Mu’azu to reduce tension among PDP members and noted that it was not easy deciding on him as the party’s National Chairman because many of the party’s governors did not want the chairman to emerge from their states so as to avoid friction between them and the Chairman, as it happened previously.

Mu’azu became the Chairman at the second time of asking, having sought the position, unsuccessfully, last March. At a zonal congress to choose a consensus candidate for the zone at that time, Mu’azu scored only one vote.

Mu’azu was later appointed Chairman, board of the Pension Commission, PENCOM, an appointment that invited attention to his eight years in office as governor.

Mu’azu had planned to be a senator and contested the senatorial election in 2007, which he lost to the machinations of his successor, Governor Isa Yuguda.

Mu’azu went off the political radar before fleeing the country for the United Arab Emirates, following the setting up of a panel of inquiry by Yuguda to probe his time as governor. The report of the inquiry accused Mu’azu of misappropriating over N20.4 billion and recommended that the amount be recovered from individuals and groups found to have been used by him to carry out the alleged heist. The former governor successfully challenged his indictment and a 10-year ban from holding public office at a  Bauchi State High Court, which declared that the commission’s recommendations and the white paper produced from such as of no effect.

The relief did not endure for long, as Mu’azu soon attracted the attention of the Economic and Financial Crimes Commission, EFCC, which investigated him for alleged misappropriation N19.8b as governor. When invited for questioning by the agency Mu’azu ignored the invitation and stayed back in Dubai.

Prior to his appointment as PENCOM chairman, Mu’azu had served as Chairman, Nigerian Maritime Administration and Safety Agency, NIMASA, in 2011.

At the time, opponents also raised an issue about the corruption allegations swirling around him.