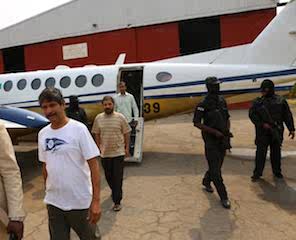 The Indian hostages alighting from an aircraft

The secret police said the rescue efforts was jointly executed with military operatives. Five members of the political gang were also arrested during the operation.

Marilyn Ogar, spokesperson for Department of State Services,(DSS) said in a statement Friday that, “On 30th January 2014, this Service in collaboration with the Military rescued three (3) Indians, Kanishik JHORAR, Mhinder Singh SAINI and Balwinder SINGH.

“They were kidnapped on 3rd January, 2014, while on board a cargo ship, MV SAN MIGUEL belonging to Martinez Hermanos Limitada, an Equatorial Guinea Company, off the coast of Equatorial Guinea and brought to Bonny Channel, Rivers State, where they were held hostage”SSS spokesperson said.

“Accordingly, on 31st January, 2014, the three (3) Indians were handed over to the Indian High Commission and the country of their employers (Equatorial Guinea Embassy) respectively. No ransom was paid for their release.

“Meanwhile, five (5) members of the kidnap gang have been arrested, while the leader of the group and others are still at large” Ogar said.