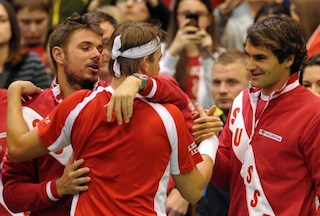 Switzerland sealed a Davis Cup quarter-final berth when a win in Saturday’s doubles gave them an unbeatable 3-0 lead over last season’s finalists Serbia.

The Swiss took control of the tie in Novi Sad on Friday when Roger Federer, yet to add the Davis Cup trophy to his array of silverware, and freshly crowned Australian champion Stanislas Wawrinka, won both of their singles.

Serbia, the 2010 winners, were up against it with their side weakened by the absence of Novak Djokovic and Janko Tipsarevic.

The winner will face either Kazakhstan or Belgium who are playing in Astana, with the hosts leading 2-1.