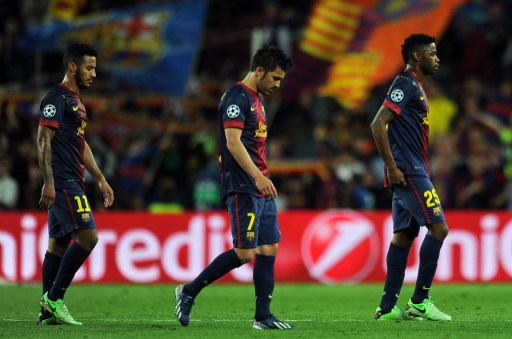 Heads bowed: a bad day for Barcelona at Camp Nou

Valencia inflicted Barcelona’s first league defeat at the Camp Nou since April 2012 as they came from behind to win 3-2 on Saturday.

Alexis Sanchez had given the hosts a deserved early lead, but goals just before and after half-time from Dani Parejo and Pablo Piatti turned the game on its head.

Lionel Messi quickly levelled from the penalty spot, only for Paco Alcacer to strike the winner low past Victor Valdes five minutes later.

And Barca’s day was summed up 13 minutes from time when Jordi Alba was sent-off for a second bookable offence.

Both Atletico Madrid and Real Madrid now have the chance to end Barca’s record run of 59 league games at the top of the table when they face Real Sociedad and Athletic Bilbao respectively on Sunday.

It was a stunning turnaround from Valencia after a dominant display from Barca in the opening half hour and Juan Antonio Pizzi hailed his side’s reaction after the break.

“We noticed at half-time that we needed to compete more and we corrected that in the second-half,” he said.

“In the second-half we were very good and dominated the game. We didn’t suffer that much at the back and every counter-attack we had looked dangerous.”

Barca boss Gerardo Martino, meanwhile, admitted his side had paid for not killing off their opponents in that opening spell.

“I was anxious to consolidate our early advantage because the game is not over until the referee blows the final whistle and it felt like we stopped after half an hour,” he said.

“This week I said that at this stage of the season you pay a heavy price for any errors and today we committed a lot of errors.”

The Argentine believed Valencia’s equaliser just before half-time was the turning point in the match.

“Probably Valencia’s first goal caused us to lose a bit of confidence. In the second-half that made us a bit more desperate, which in turn made us commit more errors. We seemed like one team in the first-half and another in the second.”