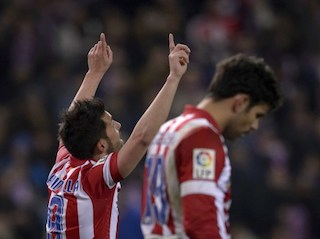 Atletico Madrid moved to the top of La Liga outright for the first time since their double winning season in 1996 with a 4-0 win over Real Sociedad on Sunday.

On an emotional evening at the Vicente Calderon, former players and fans paid their tributes to former Spain and Atletico player and coach Luis Aragones, who died on Saturday, before the match.

Fittingly it was David Villa, the competition’s top scorer when Aragones led Spain to the European Championships in 2008, who opened the scoring as he swept home Diego Costa’s low cross.

Costa himself doubled Atletico’s advantage with a composed finish before Miranda headed home the third.

And Diego Ribas rounded off a fine evening for Atletico as he marked his debut after returning to the club on loan from Wolfsburg with a thumping finish three minutes from the end.

Following Barcelona’s shock home defeat to Valencia on Saturday, Atletico now lead the Catalans by three points, but Real Madrid can move to within a point of the leaders should they beat Athletic Bilbao later on Sunday.

After a quiet start, overshadowed by the respects paid to Aragones, Villa thought he had opened the scoring 14 minutes in, but he was rightly flagged for offside.

Sociedad were unlucky not to have a penalty moments later when Miranda was adjudged to have brought down Antoine Griezmann inches outside the area by referee Javier Estrada Fernandez.

David Zuruztuza then stung the palms of Atleti keeper Thibaut Courtois, whilst at the other end Costa blazed wildly over when well-positioned 20 yards out.

The hosts went in front seven minutes before the break when Villa finished off a fine team move for his 12th goal of the season.

Villa’s joy didn’t last long, though, as he had to be substituted just two minutes later after pulling up with a muscular injury.

Sociedad enjoyed the majority of possession after the break as Atletico decided to sit on their lead, but the Basque side failed to seriously test Courtois.

The home fans then gave Diego a heroes welcome as he replaced Jose Sosa.

Costa made sure of the three points 18 minutes from time when he coolly slotted Raul Garcia’s through ball into the far corner.

And Diego rounded off the scoring when he showed great poise inside the Sociedad box before blasting high into the roof of the net.