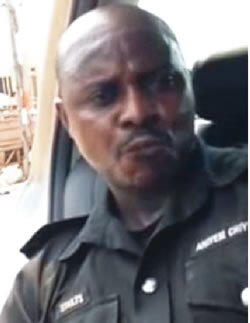 Police authorities in Nigeria have confirmed the arrest of the policeman caught in a hidden camera allegedly demanding “dollar bribe” from a citizen.

Mba said the arrest of the police officer was sequel to a marching order issued by the Inspector-General of Police, IGP MD Abubakar, to the Commissioner of Police, Lagos State, CP Umar Abubakar Manko to ensure prompt arrest and investigation of the matter.

“Following his arrest, the suspect who is now in police custody, is undergoing Orderly Room trials and if found guilty will face appropriate disciplinary actions.

“Meanwhile, the IGP has commended the unknown whistleblower in this case for his painstaking efforts in exposing what would have been a hidden crime.

“He equally enjoins other members of the public to emulate this noble and patriotic action which will certainly go a long way in checkmating crime in our society,” Mba said.

Here is the video that put the policeman in trouble: