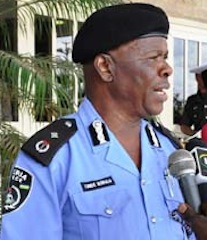 P.M.NEWS gathered that trouble started when a member of OP- MESA demanded money from the rider and when he tried to explain that he had no money to give him, he was shot and he died instantly.

When the matter was reported at Ojokoro Police Station,  the police chased the leader of OP-MESA and he was arrested along with his officers, while some of them escaped after the fatal shot was fired.

As at the time of filing this report, Tunde Sobulo, a deputy commissioner of police, led his men to pick up members of the OP-MESA team from Ojokoro Police Station where they were undergoing interrogation.

The identity of the officer that pulled the trigger could not ascertained at press time. However, those arrested were said to be Airforce personnel attached to OP-MESA.

Sources told P.M.NEWS that their operational patrol vehicle was also taken to SCID.