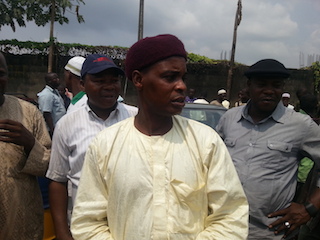 Nigeria’s Muslims have voiced concern about an apparent increase in religious “profiling” after hundreds of terror-related arrests in the country’s Christian-majority south.

Last month some 300 traders from the Muslim majority north of the country were detained in Port Harcourt, Rivers State for allegedly belonging to the banned Islamist group Boko Haram.

Most were later released.

Elsewhere, 84 apprentices were sent back to Katsina State, also in the north, after being held on suspicion of militant links as they undertook a training course in Imo, southeastern Nigeria.

In January 2012, the police in southeastern Enugu State arrested 25 hunters from northwestern Zamfara state on an annual hunting expedition to the forests, holding them for a month.

Again, they were suspected of Boko Haram links after 19 hunting rifles were found.

The insurgency by Boko Haram in Nigeria’s north is the country’s top security issue, and there are fears in the south that it could spread.

But an apparent rise in suspicions against all Muslims has prompted warnings about splitting the country further along religious and ethnic lines, as well as inter-communal violence.

Solomon Dalung, a law lecturer at the University of Jos in north central Nigeria, said the police and security forces were “profiling… citizens from a particular geo-political region”.

Current events were “taking a pattern of pre-civil war indices”, he added, drawing parallels with the situation before Nigeria’s three-year civil war.

The 1967-70 conflict came after the attempted secession of the mainly Christian Igbo in the southeast and followed religious, ethnic, cultural and economic tensions with northern Hausa Muslims.

Some one million people died in the fighting, mostly from starvation and disease. Mutual suspicions and resentment persist between north and south.

Nigeria goes to the polls next year to elect a new president and parliament, prompting observers to see politics as a factor in the arrests.

Dalung said the arrest and detention of the traders was a deliberate plan to curtail the “expansion of the political frontier” of Rivers State governor Rotimi Amaechi.

Amaechi is locked in a struggle with President Goodluck Jonathan over the spoils of oil revenue and the implementation of federal government programmes in the oil-rich Niger Delta State.

The row prompted Amaechi to defect from the ruling Peoples Democratic Party to the opposition with four northern governors opposed to Jonathan’s apparent plan to seek re-election next year.

The governors believe Jonathan has reneged on a promise to serve only one term and that by running again he will break an unwritten party rule to rotate the candidate between north and south.

The arrests are “all intended to intimidate the northern Muslims to whittle down Amaechi’s numerical support, which is augmented by the northerners in his state,” said security analyst Abdullahi Bawa Wase.

“All you need to qualify as Boko Haram in the (southeast) is to wear a beard and put on a kaftan.

“All this is happening against the backdrop of dirty politics in Nigeria ahead of 2015 elections.”

Politics is also believed to have played a part in the arrest of the Katsina apprentices to put pressure on Imo governor Rochas Okorocha.

He represents the main opposition All Progressives Congress (APC) and was educated in the north.

Khalid Aliyu, the secretary-general of the Jama’atu Nasril Islam (JNI) — the umbrella body of Nigerian Muslims — said they were tracking the situation with a view to possible legal action.

“Unpopular politicians” were using religious conflict “to sow the seed of discord and disharmony among the citizenry for selfish political motives”, he added.

Aliyu and Dalung warned of potentially devastating consequences if the situation continued.

“There are more Igbos in the north than there are Muslim Hausas in the south all together,” Aliyu said.

“It could result in a repeat of the events leading to the civil war if the north decides to go for tit-for-tat.”

Dalung agreed: “This act of profiling must be stopped immediately because it is a spell that can escalate national confusion within a very short span of time.”