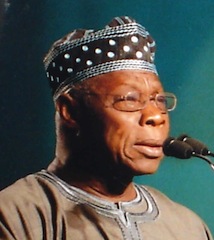 Former President Olusegun Obasanjo and former Head of State, General Muhammadu Buhari were conspicuously absent at the meeting of Council of State which kicked off in Aso Rock presidential villa, Abuja this morning.

The meeting which is being presided over by President Goodluck Jonathan was last held in March last year.

However former Heads of State and Presidents present at the meeting which was still on at the time of filing in this story include former Presidents General Yakubu Gowon,(retd) General Ibrahim Babangida (retd) Alhaji Shehu Shagari, Chief Earnest Shonekan and General Abdusalami Abubakar.

Also present were some former Chief Justices of Nigeria. Aminu Tambuwal, the Speaker of House of Representatives and Senate President David Mark were also present at the meeting. Governor Rotimi Amaechi, the Chairman of Nigeria Governors’ Forum was also absent at the meeting. Amaechi led NGF had complained about the refusal of the presidency to convey the meeting which has Vice President Namadi Sambo as the vice chairman.

It is not clear why former President Obasanjo was absent at the meeting. P.M. NEWS however gathered that it may be due to his sour relationship with President Jonathan following the exchange of letters between the two late last year.

However General Buhari has a tradition of boycotting previous meetings. The retired General who contested against President Jonathan in 2011 general elections once said in a media interview that he only attended the meeting when issues which he has interest in are on the agenda of the meeting.

There was mild drama just before the meeting began when Governor Nyako who was sitting beside the Abia State Governor requested for a change of seat after some PDP Governors led by Governor Akpabio started taunting him to return to PDP.

Apart from the incumbent President and the Vice President, members of Council of State include all former Presidents and Heads of Government, all former Chief Justices of Nigeria; President of the Senate; Speaker of the House of Representatives; all the 36 state governors and the Attorney-General of the Federation.

It was gathered that issues that would be discussed at today’s meeting include the coming national conference, 2015 general elections and Nigeria’s centenary celebrations.