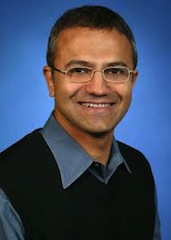 India on Wednesday celebrated the appointment of Satya Nadella as the new chief executive of Microsoft, seeing it as another endorsement of home-grown talent that has risen to the top of the US corporate world.

Nadella, who became the giant company’s third CEO on Tuesday, was born and grew up in the southern Indian city of Hyderabad and studied at Mangalore University before moving to America to further his studies and career.

“India makes a power point,” said a proud front-page headline of the Times of India newspaper about the 46-year-old cricket lover’s appointment.

“India has clearly emerged as the talent machine that is consistently churning out global CEOs,” said the daily.

Nadella, who has spent nearly half his life working for the technology titan, follows a string of Indian-origin business leaders who have made it to prestigious chief executive positions.

Uttam Majumdar, founder of Locuz Enterprise Solutions, a technology firm based in Hyderabad, told AFP that Nadella’s appointment was “a matter of immense pride”.

“He can be a role model for millions of youngsters. His appointment enhances the image of India as a nation in the eyes of the world,” he said.

Vibhor Singhal, a Mumbai-based executive at brokerage PhillipCapital India, said a key reason for the success of India-origin executives was the “openness of the US economy in terms of accepting and allowing talent from outside to rise to the top”.

The South Asian nation produces about a million engineering graduates a year and has earned a reputation for its booming IT outsourcing business, thanks to its large educated workforce and low labour costs.

But many bright, middle-class youngsters leave the country due to a lack of well-paid jobs and difficulty getting places at prestigious Indian Institutes of Technology (IIT).

In some cases, studying in the US is a choice for those who fail to gain entry to the IITs where competition is fierce for limited places.

“Is the appointment of Satya Nadella a feather in India’s cap or a slap in the face for the Indian system?” asked an editorial on the Firstpost online news portal.

It suggested that, rather than celebrate Nadella, India should question why so many talented figures flower overseas instead of on home soil where family connections are often as important as qualifications.

As in politics and Bollywood, corporate India has a tendency to keep top positions in the family, as has been the case with the Ambani, Tata, Birla and Mittal business dynasties, to name a few.

Anil Dharker, a Mumbai-based columnist on social issues, said however that there are signs of a “reverse brain drain”, with some Indians coming back home and foreigners taking up posts in Indian companies.

“The world has definitely shrunk and people are much more fluid in their movements,” he told AFP.

Outside of corporate boardrooms, Indian-origin families have thrived in the United States.

A 2012 report from the US think-tank Pew Research Centre showed the median annual income for Indian Americans was $88,000, much higher than the Asian American average of $66,000 and the overall US household median of $49,800.

Among Indian Americans aged 25 and older, 70 percent had obtained at least a bachelor’s degree, above the Asian American share at 49 percent and far higher than the national 28 percent, the study said.

Nadella is faced with the challenge of revitalising Microsoft as the world shifts to a mobile Internet era, and some hope his knowledge of the Indian market could help boost opportunities for those in the industry at home.

“One of the best that the East had to offer was embraced by the West on Tuesday, and back home there are great expectations that the winds of change will blow here as well,” said a story in The Economic Times.