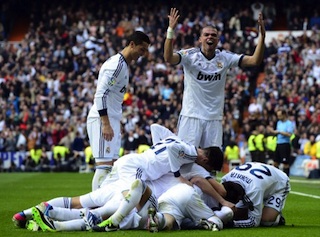 Real Madrid took a huge step towards reaching the Copa del Rey final as they beat local rivals and holders Atletico Madrid 3-0 thanks to two own goals in their semi-final, first leg on Wednesday.

Atletico beat Real at the Santiago Bernabeu in last year’s final, but the hosts quickly set about making amends for that defeat as Emiliano Insua deflected Pepe’s effort into his own net after just 17 minutes.

Jese Rodriguez, who was only starting because of Gareth Bale’s late withdrawal from the squad due to a calf injury, doubled Real’s advantage with a low finish from Angel di Maria’s pass just before the hour mark.

Di Maria was involved again as Real all but secured their place in the final when his deflected strike 17 minutes from time was credited as another own goal by Atletico defender Miranda.

Defeat ends a 24-game unbeaten run for Atletico and they will now need a remarkable fightback to retain their title in the second leg at the Vicente Calderon on Tuesday.

In a typically intense encounter whenever these two sides meet, it was the home side who threatened first as Karim Benzema’s header was blocked just in front of his own goal line by Atletico captain Gabi.

Arda Turan then had Atletico’s best effort of the first-half as he nipped in front of Alvaro Arbeloa, but his header was palmed away to safety by Iker Casillas.

It was Real who were posing a more consistent threat, though, and they went in front when Pepe wandered forward to meet Xabi Alonso’s pass and his shot deflected off Insua and past the helpless Thibaut Courtois.

Di Maria then saw another deflected effort fly just over, whilst Courtois saved from Ronaldo and Luka Modric as Carlo Ancelotti’s men ended the half in the ascendancy.

And Atletico nearly rewarded Simeone with an equaliser as they started the second period brightly but Diego Godin headed over from point-blank range.

However, Real dealt the visitors a sucker punch of a blow just before the hour mark as Di Maria found Jese with a lovely through ball and the Spanish under-21 international’s effort squeezed under Courtois.

The Belgian goalkeeper was fortunate not to see another strike slip through his grasp a minute later as he spilled Di Maria’s powerful drive.

A brilliant goal line clearance from Modric prevented Godin from halving the deficit 18 minutes from time.

And within 60 seconds, Real had added to their advantage when Di Maria’s long-range effort cannoned off Miranda to once again wrong-foot Courtois.