Nigerian causes a stir with a ' toy drone ' 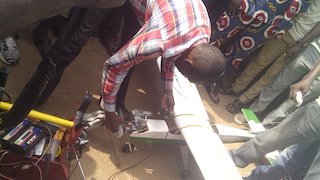 The Nigerian boy and his 'drone'

A 20 year-old Nigerian, Aghogho Ajine caused a stir in the midwestern city of Benin, when he successfully tested what he a toy drone he claimed he built with wood.

The crowd at the ever busy King’s Square buzzed with excitement as Ajine fired the toy into flight, turning the road into a runway.

The testing held up traffic.

The toy controlled by a hand-held device, flew through the sky and landed as directed.

However, officials of Edo State traffic agency held the boy for causing traffic congestion,to the dismay of the spectators.

The crowd had to force the traffic officials to return the money they collected from Ajine.

Aghogho was raised shoulder high by the elated crowd after the toy landed safely as directed.

Aghogho claimed he had never been to any school, adding that he built the drone from a personal research at home.

“I am from Delta State. I have not been to any school before. My house is my school. I learned it at home from my research. I used plywood to build it.”

According to Wikipedia: “An unmanned aerial vehicle (UAV), commonly known as drone, is an aircraft without a human pilot on board. Its flight is controlled either autonomously by computers in the vehicle or under the remote control of a pilot on the ground or in another vehicle. The typical launch and recovery method of an unmanned aircraft is by the function of an automatic system or an external operator on the ground.
There are a wide variety of UAV shapes, sizes, configurations, and characteristics. Historically, UAVs were simple remotely piloted aircraft, but autonomous control is increasingly being employed.”