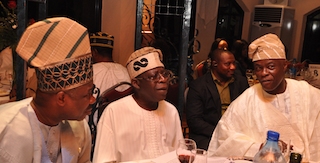 Amosun, Tinubu and Edun at the dinner

Former Lagos State governor and National Leader of the All Progressives Congress of Nigeria, APC, Asiwaju Bola Ahmed Tinubu, has described the Jonathan led government as one that routinely abuses power and manipulates the people.

Speaking at a dinner organised by a Lagos group, the New Generation, NG at the Muson Center in Lagos, Tinubu went to great length to draw a distinction between the PDP and the APC.

He blamed the Jonathan led PDP government for reckless spending and corruption in the oil sector. According to him, the administration has turned funds meant for government programmes into slush funds to fill the pockets of party loyalists.

Tinubu noted that Nigerians are yet to get a satisfactory explanation on the 400,000 barrels per day that is stolen. He opined that the NNPC has been converted into an ATM.

“Like I have maintained previously, the Sure-P project is a drain pipe. A slush fund for political patronage. For instance, the N253.5 billion alleged to have being spent on projects by the Federal government as at December 2013 is not reflective in the lives of ordinary Nigerians. In 2012, about N180 Billion accrued to the Federal Government in Sure-P alone”.

“Under the heavy weight of corruption, heavy dose of insecurity, the ticking time bomb of youth unemployment and a near total absence of institutional rationalization, Nigeria under President Jonathan clutches on like a battered engine in need of a complete overhaul. In fact, a change of engine.”

Tinubu who spoke extempore at the Dinner used his experience as the governor of Lagos as a tool to examine what is wrong with Nigeria today both politically and economically.

According to him, Nigeria punches below its weight and is trapped in a disarticulated economy occasioning poverty and frustration on people. “The AFDB, in its African Economic Outlook report of 2013 revealed that poverty has worsened since 1996 and through 11 years of the Peoples Democratic Party, PDP, rule. The efforts of President Jonathan’s government at combating poverty were also faulted”.

The former governor of Lagos State asserted that under the current economic environment, it is almost impossible for Nigeria to meet any of the predictions about its prosperity.

“The projection that Nigeria will soon emerge, at least in the next 30 years alongside three other countries as an economic giant by the British Economist, Jim O’Neil will for long be a mirage. O’Neil predicted that Mexico, Indonesia, Nigeria and Turkey are to become what he refers to as “MINT’. We all know that this is another Vision 2020 gimmick. A very distant hope with no chance of coming to fruition. Let us not for once, delude ourselves that this is possible. A country that is yet to export the smallest plastic product or one that generates a miserable 12 per cent of the total energy needs of the country can never be a candidate for “MINT”, “BRICS” (Brazil, Russia, India, China and South Africa) and as we now know, Vision 2020. Our energy woes abide”.

Tinubu explained the vision and mission of the new party, APC.

“We formed this party to improve the lot and the lives of those who don’t have. We formed it to bring dignity, hope, justice and the reality of prosperity to those Nigerians who seek these things.The PDP has never been a friend of the people and each year it becomes less of one. They have turned their backs on the people. Now it is time the people turn their backs against the PDP. The PDP claims we don’t have an ideology. We have an ideology but it is one PDP can’t understand. What the arrogant and mean don’t understand, they pretend does not exist.

“One can no longer dance on both sides of the fence. Either you are resolute for justice or for injustice. Stake your claim and sign your name to it so history may record your decision and your deeds at this critical hour. For me, I have but one life thus I have but one choice. I choose the right way. I follow the APC. I urge you all to hitch a ride on the rescue mission APC is about and rally for change and the re-building of a Nigeria that meets our dream”, Tinubu said.

“We have come to a moment in time when there is no time to waffle, obfuscate or prattle. Beginning from now and as we march toward the elections of 2015, the people shall decide whether they want to enshrine injustice, inequality and the rule of arbitrary might over their lives or they want to build a finer existence where the light of fairness, prosperity and the rule of law shines on all. “

The NG dinner, held once a year, brings together professionals drawn from diverse fields and mostly Lagos based. This year’s dinner took place Thursday.

The group which was formed in 1998 has produced a number of governors, Ministers, commissioners and key functionaries.

It is an informal think tank, a sounding board of sorts for government policy makers.