In Pictures: Aregbesola and Omisore 'jam' in Church 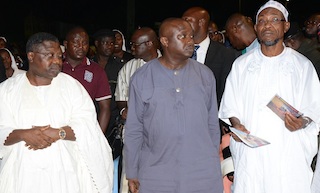 Aregbesola is an APC governor, while Omisore, a former deputy governor and senator belongs to the PDP.

At the weekend, Omisore declared his interest in contesting the governorship seat of the state in the elections scheduled for 9 August.

Both men however met on Sunday 9 February at the annual spiritual programme organised by Saint Nicholas Catholic Church, Oke-Maria, Otan-Ayegbaju. Separating them is Senator Babajide Omoworare, who unseated Omisore in the 2011 election, to represent Ife-Ijesha district.

Sikiru Deoye recorded the interactions between Aregbesola and Omisore today: