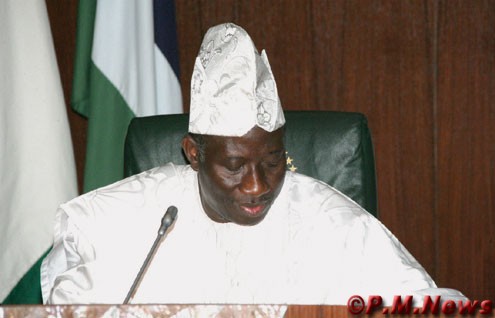 President Goodluck Jonathan in Abuja on Sunday urged Nigerians to continue to pray for the peace, stability and unity of Nigeria. He spoke at the enthronement of the Most Rev. Oche Job, as the Methodist Archbishop of Abuja Diocese.

Job succeeded Most Rev. Chimaroke Iweha, who retired in November 2013.

Represented by Prof. Chinedu Nebo, the Minister of Power, Jonathan noted that the situation in the country would have gone worse were it not for payers.

“We should continue to serve God in our nation. We need to continue to cry out (pray) to him; if we have not been doing that it will be much worse.

“Even though things don’t seem to be the best, it will have been worse if we are not crying out and telling people not to do the wrong thing,’’ he said.

The Senate President, Sen. David Mark, who read the first lesson at the service, also called on Nigerians to be faithful and continue to pray for the nation.

“All the faiths have stake in this country. Faith can do so much for us; if we have faith and believe in God sincerely, this country will make progress.

“There is no country that can make progress if the people in that country do not have faith irrespective of religion,’’ Mark said.

He urged both Christians and Muslims to live in harmony and work together for the progress and stability of the country.

Earlier, the Prelate of the church, His Eminence, Dr Samuel Uche, called on government at various levels to provide for the welfare of the citizenry.

“In any nation, there is what we called intangibles, honesty, integrity, transparency, high morality that makes a country stable; these are what the church provides.

“The government provides the tangibles like the roads, water supply, energy, employment, ensure there is security and make sure that citizenry are well cared for.

Uche urged Nigerians to do things that would sustain the unity of the nation, adding that remaining together would make the nation stronger and viable.

In a remark, Job advised the people to shun selfishness, negative political ambition, tribalism, among other vices.

“We should pray for good and love one another and things will get better on daily basis,’’ he said.