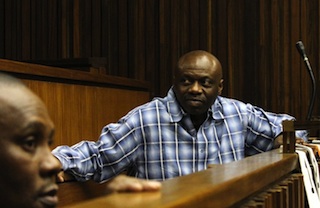 Henry Okah, the Nigerian sentenced in South Africa to 24 years on terrorism charges, has been caught in a failed jail break attempt, prison authorities said Monday.

“I can confirm that Okah is one of the five inmates that attempted to escape and whose efforts were foiled,” Manelisi Wolela, spokesman for South Africa’s department of correctional services, said.

He did not give details of the attempted escape from Leeukop prison in northern Johannesburg that is said to have taken place in January.


Okah was convicted last year and sentenced on 13 counts of terrorism, including twin bombings that killed 12 people in the Nigerian capital Abuja as the country celebrated the 50th anniversary of its independence in 2010.

He was arrested, tried and convicted in South Africa where he has permanent residency.

The department said most of the offenders involved in the botched bid to escape are serving life sentences for serious offences including murder, kidnapping and robbery.

Correctional services officials said security at the prison, which recorded 11 attempted jail breaks in the 12 months until March last year, had been tightened.