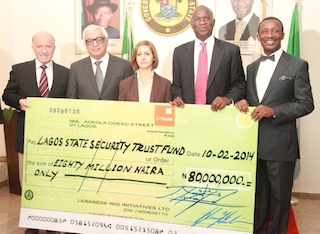 The Lebanese Nigeria Initiative, a group of Lebanese businessmen and women in Lagos, has donated N80 million and a troop carrier truck to the Lagos State Security Trust Fund, STF, to help in the battle against crime in the state.

The N80 million cheque(about $500,000) and the truck were handed over to Governor Babatunde Fashola on Monday by the Consul-General of Lebanon, Mrs Dima Haddad at the State House, Ikeja, Lagos, Southwest Nigeria.

Presenting the cheque, Haddad said the donation was made in the name of the Lebanese business community and that it was to show the appreciation the Lebanese community had towards Nigeria.

She said “this country has allowed our Lebanese citizens to establish business which has afforded them the opportunity to contribute to the country’s economy. It also helped us to show appreciation to the state government’s effort to ensure that the state is well secured. We hope that this contribution will further boost the provision of security apparatus in the state.”

Fashola thanked the Lebanese business community for the gesture towards securing the state, saying that the gesture would be one important blocks in the security architecture that the state is building.

“I want to appeal to Lebanese community and others in the state, that while this donation will go a long way in boosting the provision of security, the real security starts from every one of us. One could never spend more time at this moment on vigilance than at this moment.

“The employers should educate their employees on the importance of security. They must be interested in their own security. It is not something that someone gives to them. Lagos is safe but it doesn’t mean that we shouldn’t be security conscious,” he said.

According to the governor, the first security is self protection and safety consciousness, saying that when the people showed concern for this, it portrayed the value that government placed on safety.

“It will also do the government more good if private organizations install their own CCTV cameras because we cannot be everywhere. And the job of security requires that we get it right always,” he advised.