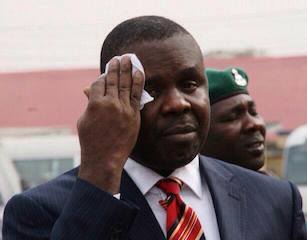 The Economic and Financial Crimes Commission, EFCC, on Monday arraigned a businessman identified as Dr. Chidi Barns Okpaluba and a Company, Quartermasters Limited before Justice L.B Lawal-Akapo of the Lagos High Court, Ikeja, on a 13-count charge of obtaining money by false pretence, stealing and publication of false statements.

Okpaluba had in 2008 allegedly approached Prince Kalu Otisi to invest in his Company, Quartermasters Limited and offered him shares valued at N135, 000,000.00 by private placement.

The volume of shares allotted to the new investor earned him a place on the board of the company and was subsequently named the chairman of the board of Quartermasters Group Limited.

Once on the board, Otisi gave a soft loan to the tune of N7, 000,000.00 (Seven Million Naira) to facilitate the running of the company.

Trouble started when Otisi requested for his share certificate as evidence of shareholding in the company only to be informed that the company was yet to be registered at the Corporate Affairs Commission.

When the charge was read to the defendant, he pleaded not guilty.

In view of the plea of the accused, prosecuting counsel, E.A Jackson asked for a trial date and prayed the court to remand the defendant in prison custody.

But the defence counsel, Ehiosu Odeh informed the court that he had filed an application for bail and served same to the prosecuting counsel.

But Jackson opposed the bail application on the grounds that he was served at the court premises and would need time to peruse the document and respond appropriately.

Justice Lawal-Akapo adjourned the case to February 19, 2014 for argument on bail the application and ordered that the defendant be remanded in Ikoyi prison.