Ship in Brazil when It 'discharged' petrol In Nigeria, says witness 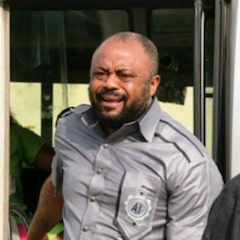 Justice Lawal Akapo of the Federal High Court sitting in Ikeja, Lagos heard today that Ifeanyi Anosike and his company Anosyke Group of Companies never carried out any Ship- to- Ship transfer of 15,000 Metric Tonnes of petrol as claimed.

Anosike and his company are being prosecuted by the Economic and Financial Crimes Commission, EFCC on charges bordering on forgery and conspiracy to obtain by false pretence the sum of N1.53 billion from the Petroleum Support Fund.

According to the prosecution witness, Oghare Ebunu, an operative of the EFCC, investigations revealed that there was no transfer of petroleum product from the mother vessel MT KLARA to a first daughter vessel MT MARITINA at Offshore Cotonou where the content was claimed to have been further transferred into SP Boston and Emocean by Ifeanyi Anosike.

Ebunu told the court that it was discovered during investigation that Anosyke Group of Companies was licensed to import 15,000 metric tonnes of PMS, and which Anosyke claimed was actually imported and transferred under the watchful eyes of SGS Inspection Services Nigeria Limited from a mother vessel MT KLARA to MT MARITINA and again to SP BOSTON and EMOCEAN.

Ebunu also told the court that a letter from Mercuria Trading NV, where the marketer was said to have procured the product, clearly stated that the marketer was not known to them and that the claimed transfer of petroleum product from MT Klara to MT Maritina was not verified by them as claimed by Anosyke.

When asked by the prosecuting counsel, Rotimi Jacobs, SAN, to further explain the findings of the EFCC as regards the location of the vessel on the said date of Ship- to -Ship transfer, the witness told the court that “according to Lloyd List Intelligence (LLI) which is saddled with the responsibility of giving the location of vessels at any point in time, on the date Anosike purportedly claimed the Ship –to- Ship transfer took place, MT Klara was in Brazil and no where near the Nigerian waters.

Rotimi then tendered the various letters from EFCC to SGS Inspection Services Nigeria limited, Mercuria Trading NV and the Corporate Affairs Commission as well as their responses to the various enquiries and verifications by the EFCC as exhibit before the court and they were admitted and marked accordingly.

Justice Lawal Akapo adjourned to April 1, 2, 28 and 29 for continuation of trial.