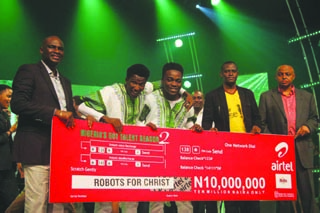 Robots for Christ with Airtel, Malta Guiness and RBF managements

After months of endless hard work and commitment, Robots for Christ emerged winners of Africa’s No 1 talent hunt show, Nigeria’s Got Talent.

The two-man dance group from Benson Idahosa University beat nine of the brightest and most unique acts in Nigeria in the race for the grand prize of N10 million.

Aside the cash prize, Robots for Christ will be joining season 1 winner, Amarachi Uyanne, as Airtel Ambassadors.

“We can’t express how we feel right now. We are just overjoyed and are sincerely grateful to Nigerians for believing in us and voting for us,” said the excited duo.

The world tuned in to Nigeria, as finalists showed their prowess, dazzling judges and viewers, in a final bid to win the keenly contested grand prize of N10 million.

“From their impressive costumes to their very well synchronized dance moves, the Robots for Christ were one act that always impressed us,” said a proud Yibo Koko.

The grand finale witnessed performances from Nigeria’s Got Talent Season 1 winner, Amarachi Uyanne, Bash the comedian and many more.