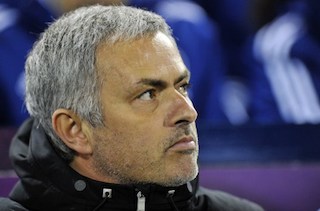 Chelsea manager Jose Mourinho felt that his team’s draw against West Bromwich Albion underlined his controversial claim that the London club are the underdogs in the Premier League title battle.

Substitute Victor Anichebe’s late equaliser on Tuesday earned West Brom a 1-1 draw that meant Chelsea were forced to settle for a lead of two points, as opposed to four, at the top of the table.

Branislav Ivanovic’s goal in first-half stoppage time had given Mourinho’s team the lead, but their failure to secure maximum points gives both Arsenal and Manchester City, who play on Wednesday, the chance to claim top spot.

The Portuguese played down his side’s chances in the race to be crowned champions following their recent 1-0 victory over City at the Etihad Stadium, referring to them as the title race’s “little horse”.

Asked if Tuesday night’s result at The Hawthorns supported his comments, he replied: “Yes. A complete team kills this game — 2-0, goodbye. We didn’t.

“I think it was not very different to the City win because we had a lot of chances to kill the game and we never killed it.

“We went to the last 10 minutes and City had a couple of shots. The difference between that game and this one is that then we never made one defensive mistake.

“Here, in the last 20 minutes, we made a couple of defensive mistakes. In the end I think they deserved it because of their efforts.”

Anichebe, on the pitch 14 minutes as a replacement for Morgan Amalfitano, headed home in the 87th minute to secure a precious point that lifted West Brom out of the bottom three by virtue of goal difference.

Mourinho refused to point the finger at individuals, but he admitted that his team, who were without the injured John Terry, had lacked “personality”.

“I don’t speak about names. We as a team made mistakes,” he said. “I don’t like to individualise and if John is not here, it is not because I don’t want, it is because he can’t.

“He is a guy with big personality and it could be different. We accepted for too long their dominance in the last 20 minutes. We made a couple of defensive mistakes and were punished in one.

“My defensive line started playing too deep. We gave them the ball and waited for them to put it in our box and fight against it. But it is not our game.

“I think also a bit of a lack of personality. We must have the personality to get out. At the end of the day it is one more point and we have one more than the previous day.”

West Brom manager Pepe Mel has now drawn all three of his home matches since taking charge of the Midlands club in January, but is still searching for a first win.

“I am proud of my players,” said the Spaniard. “It was good to have different halves — the first was good defence, only two chances for Chelsea.

“The second good attack and mentality. It was the best performance (of his tenure). This is a good team we were playing.

“We have a day off then go to Spain for what will be like a pre-season (training camp). If we play as we did in the second half, we will win games.”