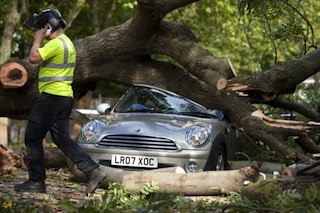 File photo: Britain's storm: a tree falls on a car

Hurricane-force winds from an Atlantic storm left tens of thousands of Britons without power Thursday and one man dead, adding to widespread misery after devastating floods caused by the wettest winter in 250 years.

Around 80,000 households remain without electricity, with Wales the worst affected by the “Wild Wednesday” storms, although the figure was reduced from some 150,000 overnight as electricity workers battled to reconnect people.

One man died after being electrocuted while attempting to move a fallen tree that had brought down power lines in Wiltshire, southwest England.

Gusts approaching 100 miles (160 kilometres) per hour tore at parts of England and Wales, and the River Thames was predicted to rise to its highest level in more than 60 years in places, threatening towns and villages to the west of London.

Major General Patrick Sanders, who is co-ordinating the armed forces response that has seen hundreds of troops on the streets, called the conditions an “almost un-paralleled natural crisis”.

The conditions brought chaos for commuters, stranding a train carrying hundreds of passengers after overhead lines came down in Yorkshire, northern England.

Passenger Carol Machin told BBC radio: “We haven’t moved. It’s a complete accident, there’s nothing you can do. There’s electrical line here, there and everywhere.”

More than 5,800 properties have flooded since early December, officials said.

The flooding started in the southwestern county of Somerset but since January the River Thames near London has been badly affected with more than 1,100 properties deluged there since January 29, authorities said.

More soldiers were drafted in to rescue residents and lay sandbags in deluged villages where primary schools have been transformed into makeshift emergency centres.

Fourteen severe flood warnings — indicating a danger to life — were in place in Berkshire and Surrey to the west of London, while two remain in Somerset.

Forecasters said 70 millimetres (2.75 inches) of rain would fall by Friday in southwest England.

Emergency efforts were picking up following criticism of a sluggish response, and the military said 1,600 soldiers had been deployed with 2,000 in total available.

In Wraysbury, the Thameside village that has been submerged since the weekend, 83-year-old Jennie Francis’s house has flooded and her hallway was filled with water.

She has been forced to take refuge at her son’s home, but she said the arrival of the army had made a huge difference to the village’s morale.

“The soldiers have been absolutely marvellous, it’s wonderful to have them here. People were cross before, but now they are relieved to have some help,” she told AFP.

The Twitter sites of the host football clubs said the safety of the fans travelling to and from the grounds could not be guaranteed because of the strong winds.

The embattled Environment Agency — the government body responsible for flood defences that has faced the brunt of criticism — fought to defend its reputation.

Chief Executive, Paul Leinster, said: “We continue to have teams out on the ground 24/7 working to protect lives, homes, businesses, communities and farmland.”

Prime Minister David Cameron chaired the government’s COBRA emergency committee and then told parliament he stood by his pledge that “money is no object in this relief effort”.

He warned that a further 800 to 1,000 homes were at risk of flooding as the Thames rose.

He also said grants of up to £5,000 (6,100 euros, 8,300 euros) would be available to businesses and homeowners affected by flooding to allow them to better protect their properties in future.