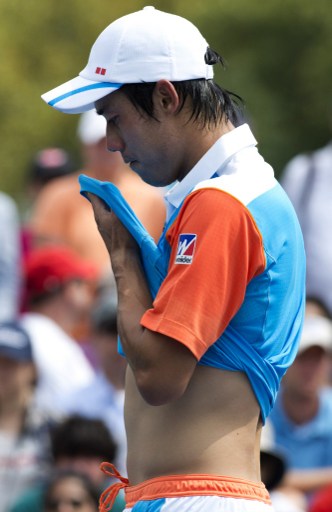 Defending champion Kei Nishikori of Japan advanced to the quarter-finals of the $647,000 ATP US Indoor Championships on Wednesday by defeating Germany’s Benjamin Becker 6-4, 6-4.

Nishikori, a top seed for the first time in an ATP event, led 4-2 in the second set but was broken in the eighth game by Becker to level the set.

But the German double-faulted away a break in the ninth game and Nishikori held for the victory after 84 minutes.

The 17th-ranked Japanese star denied Becker on 5-of-8 break points while winning the same amount of break chances from the German.

Nishikori, who like all top-four seeds enjoyed a first-round bye, also connected on 65 percent of his first serves to 48 percent for Becker.

Russell will next face the winner of a Tuesday matchup between Australian third seed Lleyton Hewitt and Cypriot wildcard Marcos Baghdatis.

Either Spanish second seed Feliciano Lopez or Croatia’s Ivo Karlovic will face Sock in the quarter-finals.