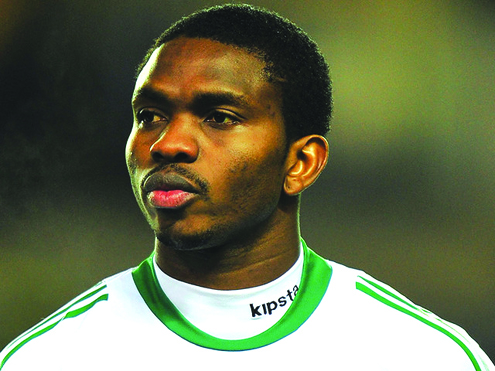 The decision of Coach Stephen Keshi to recall captain of Nigeria’s Super Eagles, Joseph Yobo, into the team is currently causing ripples among football lovers in the country.

The on loan Norwich of England defender, who is closing in on a century of caps last played for Nigeria in 2013 when the Eagles won the Africa Cup of Nations after a 19-year wait, was yesterday named among the 23 players for the 5 March friendly against fellow World Cup finalists Mexico in Atlanta, Georgia, USA.

Nigerians are divided over the decision to extend an olive branch to the former Everton FC of England player.

While a few of them believe that the 33 years old deserves a recall based on his wealth of experience, others argued that he is a spent force and has no business in the team again.

Ex-international Moses Kpakor is of the view that Yobo still has something to offer the team, adding that the technical crew of the Eagles should take advantage of Yobo’s defensive prowess when the chips are down.

A member of the Nigeria Football Federation, NFF, who craved anonymity, told P.M.NEWS Sports early today that the decision to hand Yobo a recall was arrived at by the technical committee of the NFF, adding that it was the committee members that compelled Keshi to invite Yobo.

“They advised Keshi to invite a number of players to see if they can fit into his World Cup plans. That was the reason he recalled Yobo, Ike Uche and a number of new players,’’ he said.

A FIFA licenced football agent Friday Nwoye argued vehemently that Yobo’s recall could bring disunity into the team. “Why should Yobo be recalled at this crucial time? I just hope and pray that what befell Nigeria at the France ’98 World Cup would not happen again,” Nwoye said.

Celestine Ezim, a grassroots football coach based in Lagos corroborated Nwoye’s stand. Ezim, Chief Coach of Prime Warriors, FESTAC Town said inviting Yobo back into the Eagles’ fold may disrupt the cohesion that has been in existence between Kenneth Omeruo and Godfrey Oboabona.

“Both players paired well in the Eagles’ centre defence at the South Africa 2013 Nations Cup and the Confederations Cup in Brazil.

“People may not know that Omeruo and Oboabona were teammates at Sunshine Stars back then and that what was helped Nigeria in South Africa. I think inviting Yobo is like inviting distraction into the team.’’ Ezim said.