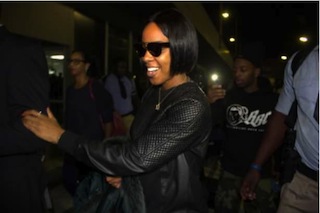 The arrival of the US singer for Valentine concert in Lagos

The star singer touched down late last night at the Muritala Muhammed International Airport with her entourage including her manager and fiancé, Tim Witherspoon.

Dressed in black gown, the ex-Destiny’s Child singer was seen clinging to her beau as she made her way through the welcoming crowd.

Kelly will be hosting the red carpet event with Darey Art Alade as well as  headline the concert proper scheduled to hold at the Oceanview Ground of Eko Hotel & Suites, Victoria Island, Lagos.

The pop diva, who was honoured with a lavish 33rd birthday anniversary party on 11 February by her friend and ex-group member, Beyonce Knowles, is coming to Nigeria for the second time.

She will also be performing at the concert alongside other top Nigerian stars including Tiwa Savage, D’Banj, Waje, JJC,  Zaina and others.