Kelly Rowland thrills Lagosians at Darey's 'Love Like A Movie2' 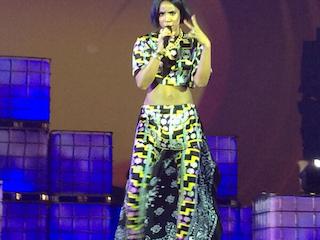 American international singer and actress, Kelly Rowland was at her best on Saturday 15 February as she thrilled thousands of concert goers at the “Love Like A Movie2: Love Roller Coaster Edition” held at the Oceanview Ground, Eko Hotel and Suites, Victoria Island, Lagos.

Kelly, a sexy member of the defunct girl group, Destiny Child, which had as co-members Beyonce Knowles and Michelle Williams, appeared on stage at a little after 11pm, when Darey introduced the pop love.

Sizzled in sexy black and yellow short top and long trouser print dress which left out her toned mid-riff, Kelly opened her gig with “Dilemma”, a hit duet she had with rap star, Nelly.

She had some amazing acrobatic dancers to enliven her performance. The dancers were floating upside down in the air as Kelly launched into another hit “When Love Takes Over”. This drew her a wider applause as many screamed over her brilliant performance. But a brief technical hitch interrupted her performance.

She gave way for show host, Darey and young rapper, Mo Eazy, who came on stage to render another beautiful collaboration.

After theirs, the X Factor judge came back on stage for another round of gig starting with “Kisses Down Low” and “Independent”. These were followed by other hits from her repertoire.


Early last night, Kelly had tweeted to annnounce to the world of her role at the show. “Headed to host #LoveLikeAMovie2’s Red Carpet with @Darey. Will I see you tonight?? #Lagos #Nigeria,” she tweeted.

She appeared on the over 200 metres red carpet in an Ankara crop top and short design and had photo opportunity with lots of guests.

After a couples of hours for the red carpet reception, the concert proper started at exactly 10.45pm with Darey surprisingly descending on to the stage from a high crane stationed beside the stage. With a brief welcome of guests to the second edition of the Valentine’s concert, the R&B singer kickstarted the night with a reharsh of Seal’ “Kiss By A Rose”.

He followed his performance with duets with various top acts.

Darey shared a ragga love with Afro Soul diva, Waje, as they both performed “Turn Your Light Down Low” while the dancers stunned with fire balls.

Timi Dakolo in his signature waist coat and tie serenaded the guests with the song “When A Man Loves A Woman”.

“This outdoor show was a success. But it was a great risk taken by Darey but thank God for him as the weather stayed clement,” Dare Esan, a producer with PrimeTime Entertainment told P.M.NEWS at the venue.

Also sharing his excitement on the success of the show, Tope Esan, New York-based Nigerian Entertainment entrepreneur said: “Love Like a Movie 2. Mehn, u have to be here to understand this is the best show ever in Naija!!!”.

Love Like A Movie Series2 has the backing of Etisalat, Moet n Chandon and Fayrouz has the official sponsor.