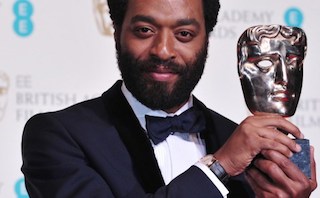 Chiwetel Ejiofor poses with the award for a leading actor

“12 Years a Slave”, the distressing tale of a man sold into slavery, was the big winner at the Baftas on Sunday, giving the Steve McQueen directed picture a huge pre-Oscars boost.

It scored an earlier success when British actor Chiwetel Ejiofor, who portrays free black man Northup as he is kidnapped and enslaved in the United States, walked away with the best actor prize.

Ejiofor said he was “so deeply honoured and privileged” to receive the award and praised McQueen.

“This is yours by the way, I know that, you know that,” he told the director. “I’m going to keep it but it’s yours”.

London-born McQueen used his acceptance speech to thank his “one and only mother” and to highlight the issue of modern day slavery.

“There are 21 million people in slavery as we sit here,” he explained. “I just hope 150 years from now our ambivalence will not allow another film-maker to make this film”.

However, “Philomena” did win in the adapted screenplay category. Leading actor Steve Coogan praised the “real Philomena Lee”, revealing that she was in the audience.

McQueen missed out on the best director award, which instead went to Mexican Alfonso Cuaron for “Gravity”.

Accepting his award, he said: “You can not tell from my accent but I consider myself a part of the British film industry”.

The British Academy of Film and Television Arts awards are the highlight of the British film calendar and a useful guide to which way the Academy Awards might go on March 2.

The superstar couple made an unexpected appearance on the red carpet in matching tuxedos and signed autographs for hordes of fans camped outside the venue.

Bafta president Prince William was also at the ceremony, which was hosted for a ninth time by actor Stephen Fry.

He opened proceedings with a tribute to Helen Mirren, who received Bafta’s highest accolade, the Academy Fellowship “in recognition of her exceptional contribution to film”.

Mirren, who has played Elizabeth II on stage and screen, was presented with the award by William, who called her “an extremely talented British actress who I should probably call granny”.

The 68-year-old actress quoted Shakespeare’s Tempest during her acceptance speech.

“We are such stuff as dreams are made on and our little life is rounded with a sleep,” she said.

“My little life is rounded with this honour, thank you very much indeed.”

The British capital has recently suffered freak storms, but conditions were fine if cold on Sunday, allowing stars to dazzle on the red carpet.

Oscar-winner Emma Thompson arrived wrapped up in a red dress and white coat with a huge furry collar, while “American Hustle” star Amy Adams posed for photographers in a floor-length black gown from Victoria Beckham.

Leonardo DiCaprio, Christian Bale and Tom Hanks, all nominated in the Best Actor category, were also in London for the event.