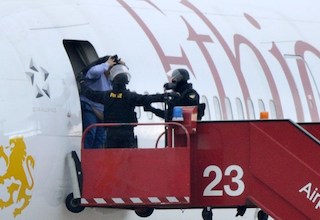 Ethiopia said Monday it was investigating a co-pilot who hijacked an Ethiopian Airlines flight, bound for Rome, and forced it to land in Geneva.

“I’m now making contact with the airline CEO as to what was wrong with him and if they know anything about him and his background,” Ethiopia’s Information Minister Redwan Hussein told AFP.

He said he had been informed that the co-pilot, who he understood was an Ethiopian national in his 30’s, took control of the Rome-bound Boeing 767 “when the pilot went out for the break, and then he wouldn’t allow him to get back in.”

“There was not any threat, there was not any attack or threat attempt made to the passengers, because the only thing happened was between the pilot and the co-pilot,” the minister added.

“I don’t think the passengers were afraid,” he added. “We have not yet heard about any physical violence or scuffle.”