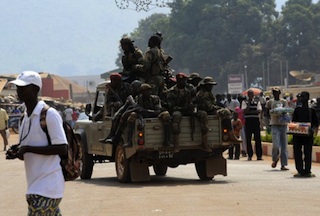 Chad’s President Idriss Deby on Tuesday called on the UN to commit more troops to the Central African Republic in order to end the crisis in the strife-torn country.

Speaking at a press conference after talks with Central Africa Republic’s interim President Catherine Samba Panza in Ndjamena, Chad’s capital, Deby warned that France and the African Union “cannot carry out their mission properly whatever their determination” as they did not have enough troops.

“We need more men, more means,” said Deby, adding that only the UN could provide troops in large numbers.

“Contacts should be established with Seleka elements that returned to their region in the north,” he said.

A mooted UN peacekeeping operation could involve nearly 10,000 troops but would need the green light of the so-far wary African Union and a UN Security Council resolution.

Currently there are 2,000 French troops and some 5,400 African troops already on the ground. In addition, 1,000 European Union troops are to be sent to the country.

Deby’s comments came as it was claimed that 11 people had been killed in further clashes between African peacekeepers and fighters from the mainly Christian “anti-balaka” militia.

The MISCA African Union force said in a statement that a convoy of civilians under its escort was attacked by anti-balaka elements carrying firearms.

Eleven assailants were killed and 12 civilians injured in the incident in which the African Union troops acted in self-defence, it added.

Earlier, a gendarmerie source said the clashes at Cantonnier, near the border with Cameroon, had left eight people dead — two anti-balaka and six civilians.

The clash occurred at a checkpoint erected by the anti-balaka when a MISCA patrol refused to comply with the demands of the militiamen, the gendarmerie said.