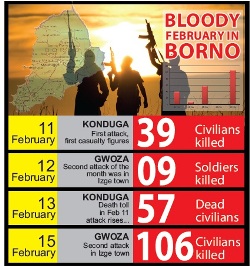 In a move that contradicted reality, Nigeria’s Presidency on Tuesday dismissed claims by Governor Kashim Shettima of Borno State that the Boko Haram insurgents are better armed than the Nigerian military.

Doyin Okupe, Senior Special Assistant to the President on Public Affairs told journalists at a press conference in Abuja that the claim by the Governor while speaking to journalists on Monday that Nigerian military cannot defeat the Boko Haram insurgents is false and that the country is not at war.

Rather, the presidential aide said what the country is confronted with in the North east part of the country is guerrilla warfare from insurgents who are motivated by ideological fanaticism.

“We state authoritatively without any fear or equivocation whatsoever that Nigeria is already winning the war against terror and the activities of the insurgents will be terminated within the shortest possible time,” Doyin Okupe told reporters in Abuja.

He said government troops were “on top of the situation” after launching an offensive to end the four-year-old violence.

“We are certainly not involved in conventional warfare but are rather engaged in guerrilla warfare with all its unpredictability. However, it is heartwarming that our military, which has participated in numerous international peace keeping operations where they helped to quell insurgencies, had acquired the sophistication and necessary capacity to adapt to the ever changing modus operandi of the insurgents.

“It is clear that Governor Shettima does not have the expertise to categorize or classify the effectiveness of any weapon. We state categorically that the Nigerian military is one of the best equipped in Africa and that in 2014, the Federal Government made budgetary provision in excess of N1 trillion for the military and other security agencies, an amount, which is about 22 percent of our entire national budget for this year.

“This definitely belies the suggestion in certain quarters that the Federal Government is not doing the needful in prosecuting this war,” said Okupe.

He also debunked the notion that the morale of the military is low. On the contrary, men of the Nigerian Armed Forces remained highly motivated in the war against the Boko Haram insurgents by patriotic sense of duty, national pride and strict adherence to professional ethics.

Governor Kashim Shettima of Borno State had told journalists yesterday that members Boko Haram seem to be more motivated than the men of the Nigerian armed forces.

The Governor whose state has been under consistent attacks which have claimed hundreds of lives in the past few weeks told State House correspondents after a visit to President Goodluck Jonathan on Monday that with the activities of the insurgent group, Nigeria seem to be in a state of war with the military struggling to defeat Boko Haram which seemed better armed than them.

Over 100 people were reportedly killed in separate attacks in Baga and Izge villages of Kukawa and Gwoza Local Government Areas of Borno State by suspected members of Boko Haram sect at the weekend.