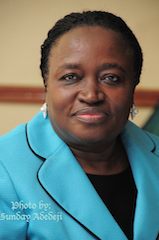 Dr. Sarah Omotunde Alade (OON), appointed acting governor of the Central Bank of Nigeria, by President Goodluck Jonathan today, has been the Deputy Governor, Economic Policy for the bank since 2007.

She replaces Sanusi Lamido Sanusi, who has been the governor the past four years.

She started working in 1977 with the Ministry of Finance and Economic Development, Ilorin, Kwara State. In 1991, she joined the University of Ilorin as a Lecturer in the Department of Accounting and Finance.

Dr. Alade has served on the teams on major economic policy studies, and has been involved in the preparation of Central Bank of Nigeria’s Monetary and Credit Policy Proposals over the years. She was actively involved in the drafting of the Medium Term Economic Programme (MTP) for Nigeria and the IMF staff Monitored Programme/Standby Arrangement.

She was appointed Director, Banking Operations Department in May 2004. In that capacity, she served as Chairman Board of Directors, Nigeria Interbank Settlement System (NIBSS) as well as Secretary, National Payments System Committee (NPSC).

She is married and has children.