Arowolo: The journey to the gallows 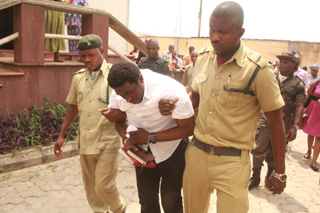 Justice Lateefat Okunnu of the Nigerian high court in Ikeja on Friday, 21 February 2014, sentenced Akolade Arowolo to death over the murder of his wife, Titilayo. Arowolo was charged with stabbing his wife, a banker, to death on June 24, 2011 at their residence at 8, Akindeinde Street, Isolo, Lagos.

Akolade Arowolo was arraigned before a Yaba Magistrates’ Court over murder of his wife, Titilayo on June 24, 2011.

His plea was not taken and the case was adjourned pending the advice of the Lagos State Directorate of Public Prosecutions (DPP).

The case was transferred to the Ikeja High Court, and he was arraigned before Justice Lateefat Okunnu.

He pleaded not guilty to the one-count charge of murder.

The court remanded him at the Ikoyi Prison, Lagos.

The case was adjourned till Jan. 17, 2013 for substantive trial.

Arowolo was brought to court but the trial stalled due to absence of the prosecution’s first witness, Mr George Oyakhire.

The Lagos State Director of Public Prosecution, Mrs Olabisi Ogungbesan, said that Oyakhire, the father of Titilayo, was not available.

She told the court that the witness was in Kano and could not arrive in Lagos on time due to nationwide protest against the removal of petroleum subsidy.

The trial began with the deceased’s father and sister testifying against Akolade.

Mr George Oyakhire and his daughter, Ijeh, testified that Akolade’s marriage to Titilayo was characterised by violence and abuse.

The couple’s co-tenant, Mr Adewale Adeyemi, also testified that he heard a loud noise when he was in his apartment.

He claimed that he saw Akolade Arowolo rushing out with a deep cut in his palms after the incident.

The prosecution tendered some pieces of evidence relating to the murder which were admitted by the court as exhibits.

They included a kitchen knife used in the murder, four mobile phones and 29 crime-scene photographs taken by the police.

The prosecution called two more witnesses to give evidence.

The fourth witness, Mr Saidu Husseni, a security man at the residence of the Arowolos, admitted that he was in the house on the day fateful day.

Speaking in Hausa Language, Husseni alleged that he saw Akolade washing blood from his hands, while urging him to hurriedly open the gate.

The fifth witness, ASP Titus Ogbonna, from the Homicide Section, CID, Yaba, Lagos, told the court that a N100 note, stained with blood, was recovered from Akolade’s vehicle.

The court adjourned the trial till March 20,2012

Ogbonna continued his testimony by claiming that investigations by the police led to a “convincing” conclusion that Titilayo was murdered by her husband.

Titilayo’s step-mother, Mrs Adetoun Oyakhire, also testified that the deceased was planning to divorce her husband before she was killed.

She said that Akolade had a history of violence with the deceased.

The blood-soaked N100 note said to have been recovered from the floor of Akolade’s Honda Accord, after his arrest by the police, was also admitted as exhibit.

Oyahire insisted that she had a cordial relationship with the deceased and had counselled her to be a good wife and to always put her marital problems before God.

Another prosecution witness, Mr Solomon Ailoyen, told the court how Akolade’s car was found in Aswani area of Lagos on the fateful day.

The court adjourned the trial till April 24,2012

The trial is stalled due to the absence of prosecution witnesses.

The DPP apologised to the court for the absence.

Another sister to Titilayo, Miss Folake Oyahire, told the court how she discovered the lifeless body of her sister after the murder.

The couple’s landlord, Mr Julius Akinloye, also testified that another tenant told him that he saw Akolade jumping from the balcony of his apartment on the day of the incident.

The 10th prosecution witness, Insp. Gift Nyeche, a Forensic Photographer with the State CID, Panti, Yaba, was called to testify.

Nyeche told the court how he took some photographs of Akolade Arowolo’s car at the crime scene during an investigation on June 28, 2011.

Tendering of the photographs as exhibits was rejected by the court, which held that they were not accompanied by negatives in line with Section 86(4) of the Evidence Act, 2011.

The matter was adjourned till June 7, 2012 for continuation of trial.

The court admitted the crime scene photographs as exhibits following the attachment of the negatives.

The Akolade Arowolo slumped in the dock during trial.

He was revived by prison officials and immediately taken outside the court room to take drugs.

Two police officers, Insp. Benson Ajie and Sgt. Bayem Cletus, had earlier testified against him during the proceedings.

Ajie, who is of the Homicide Department, State CID, Panti, Yaba, and Cletus, an Officer attached to the Aswani Police Station, both claimed that the confessional statements made by Akolade were obtained voluntarily.

The judge adjourned the matter till June 28, 2012 following Akolade’s illness.

Akolade arrived at the courtroom at about 8.45a.m. with the assistance of a male prison official, and sat on the gallery with his head resting on a chair.

His lawyer, Mr Olarenwaju Ajanaku, told the court that he was critically ill and could not withstand the rigours of trial.

Justice Latifat Okunnu threatened to issue a warrant of arrest against Sgt. Cletus Bayem for failing to appear in court over the case.

Sgt. Cletus Bayem appeared in court to conclude his testimony.

The prosecution also called a commercial photographer, Mr Julius Okolawon, to give evidence.

He told the court that he took seven photographs of Akolade Arowolo’s car at the Aswani Police Station.

The photographs were admitted by the court as exhibits.

The matter was adjourned till Oct.15, 2012 for continuation of trial.

Obafunwa, the Chief Medical Examiner of the Lagos State, said that he conducted both external and internal examination of the body of the deceased during the autopsy.

According to him, the final result of the autopsy reveals that the death was caused by multiple injuries in the chest and abdomen due to multiple sharp wounds and long force trauma.

The trial is stalled following the absence of the representative of the MTN Nig. Ltd., which was subpoenaed, to give evidence in the case.

Mr Kingsley Ehebha, a member of staff of MTN Nig. Ltd. appeared before the court to testify.

Ehebha, a fraud analyst at the company, produced Arowolo’s call records between June 1 and July 26, 2011.

The call logs were admitted by the court as exhibits.

The DPP announced closure of their case against the accused.

The matter was adjourned till Nov.29,2012 for Akolade to open his defence.

The accused father, Mr Mudasiru Arowolo, opened testimony for the defence, claiming that his son did not murder Titilayo.

He blames the trouble which rocked the Arowolos’ marriage on undue interference by Titilayo’s father and step-mother.

According to him, the deceased had once threatened to kill her husband and herself during a quarrel, which happened when they visited him.

The matter was adjourned till Dec.4,2012

The trial is stalled due to the absence of the accused mother, Mrs Bolanle Arowolo

The defence counsel, Olarenwaju Ajanaku, said she was ill and apologised for her absence.

Akolade’s mother, Mrs Bolanle Arowolo, testified on behalf of her son who she described as “God-fearing”.

She said her late daughter-in-law was rude and troublesome, earning her the nickname “Margaret Thatcher”.

The witness also insisted that his son was innocent of the crime.

A defence witness, Miss Efe Omordia, called to testify on behalf of Arowolo, described him as a role model.

The witness said she worked with Joy Bringers International, a non-governmental organisation (NGO), involved in the counselling and rehabilitation of inmates.

According to her, Akolade has shown exemplary leadership qualities in the prison environment and is a member of the prison’s recreation, reformation and rehabilitation club in Ikoyi Prison.

The matter was adjourned till March 28,2013 for continuation of trial.

Arowolo entered the witness box and began the narration of his own side of the story.

He told the court that he got married to Titilayo on Aug. 8, 2008 and the family was blessed with a baby girl few months after the marriage.

According to him, ego and immaturity caused several problems between him and his wife and deprived them of marital bliss.

Akolade continued his testimony, telling the court that he did not murder Titilayo.

Akolade said his parents in-law were responsible for the trouble in his marriage.
He claimed Titilayo died after accidentally falling on a knife she was using to stab him during a quarrel on the day of the incident which was his birthday.

The matter was adjourned till Sept.17,2013 for adoption of final written addresses.

The judge adjourned the adoption of the written addresses till Oct.2,2013.

She directed the prosecution and defence to file and serve the processes before the next adjournment date.

The judge imposed a N10,000 fine on Akolade’s counsel, Olarenwaju Ajanaku, for wasting the time of the court.

Okunnu said Ajanaku’s failure to file and regularise the defence processes was a setback to the speedy conclusion of the case.

She adjourned the matter till Dec.4,2013

DEC.4,2013
Both the prosecution and defence adopted their final written addresses.

Parties re-adopted their written addresses. Ogungbesan asked the court to convict Arowolo of the charge.

She argued that the prosecution had prove its case against the accused beyond reasonable doubt.

However, Olarenwaju disagreed with the prosecutio, asking the court to discharge and acquit Arowolo.

Okunnu told parties that date of judgment would be communicated to them.

The judge found Akolade Arowolo guilty of the murder, and sentenced him to death.