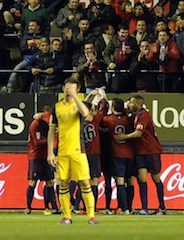 Atletico Madrid missed the chance to join Real Madrid atop La Liga as they were beaten 3-0 by Osasuna at El Sadar on Sunday.

The hosts got off to a perfect start when Alvaro Cejudo took advantage of some slack marking to volley home a short corner at the back post.

Osasuna doubled there advantage on 21 minutes when Emiliano Armenteros fired a sumptuous left-footed effort in off the post and Roberto Torres killed the game as a contest when he headed in the third just before half-time.

Atletico now trail Real by three points, but can make amends when they host Los Blancos at the Vicente Calderon next Sunday.

Diego Simeone’s men had taken a huge step towards reaching the last eight of the Champions League in midweek as they won 1-0 away at AC Milan, but their efforts on Wednesday looked to have taken their toll as they conceded three times in the first-half for the first time since Simeone took charge over two years ago.

The Argentine had left out three regular starters in Miranda, Koke and Arda Turan from his starting line-up and those coming in did little to further their case for more playing time.

Cejudo opened the scoring on six minutes when Arementeros’ cross perfectly picked out his late run into the box and he finished first time low past the helpess Thibaut Courtois.

The Belgian keeper was beaten again 15 minutes later when Armenteros saw off a weak challenge from Atletico captain Gabi before rifling the ball home from 25 yards.

However, any doubt over the outcome was wiped away three minutes before half-time when Torres found space between Diego Godin and Toby Alderweireld to head home Damia’s cross from the right.

Simeone introduced Koke, Turan and Raul Garcia after the break but Atletico were still unable to find a way through.

Garcia saw an acrobatic effort from a narrow angle touched to safety by Andres Fernandez before Costa blasted his side’s best opening of the game over eight minutes from time.

Earlier, Athletic Bilbao consolidated their position in fourth with a 2-0 win away at nine-man Real Betis.

Iker Muniain put Athletic in front before Damien Perquis and Lorenzo Reyes were given their marching orders for two bookable offences.

And 20-year-old forward Guillermo Fernandez Hierro sealed all three points with his first senior goal for the club nine minutes from time.

Valencia and Sevilla also kept up their fight for European football with narrow victories over Granada and Rayo Vallecano respectively.