How Nigerian cop conspired with vandals to siphon crude oil 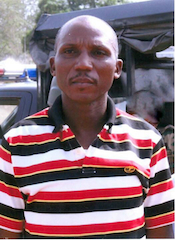 A witness in the on-going trial of Dodo Chilla Bulus, an Assistant Superintendent of Police, today February 25, 2014 told Justice E.S Chukwu of the Federal High Court, Abuja how the accused person conspired with vandals to break crude oil pipeline and siphon product.

Bulus is currently being prosecuted by the Economic and Financial Crimes Commission on a 2-count charge bordering on oil theft and pipeline vandalism.

At the resumed hearing of the case on Tuesday, Lolade Longe, an operative of the EFCC who was led in evidence by Elizabeth Ayodele, counsel to Commission, told the court that the accused person served as informant to vandals who siphoned crude oil from broken pipeline.

“I interrogated the suspect. He told me and admitted in his statement that he was the Commander of the Task Force, Pipeline Vandalism. He said that he received a text message from his boss, ACP Ibadim Friday informing him that vandals are likely to operate along Abaji Road and that he should be at alert.

Instead of following up the message with action, Dodo Bulus forwarded the same message sent to him by his boss to one Joseph Amaechi, a prime suspect in this matter before your Lordship,” Lolade said.

She further disclosed that the accused person received the sum of N1.1m (one million, one hundred thousand naira) from the said Joseph Amaechi as gratification for the service rendered.

It would be recalled that at the last adjourned date, February 18, 2014, the first prosecution witness, Mailafia Yakubu told the court how he led a team of investigators to arrest the vandals and their accomplice, Dodo Chilla Bulus.

Bulus who had been in prison custody since his arraignment on February 18, 2014 was granted bail by Justice Chukwu in the sum of N10m (ten million naira) with two sureties in like sum. The sureties must have landed properties within Abuja Municipal Council and must swear to an affidavit of means.

The sureties must be directors in any federal establishment or Officers not below the rank of an Assistant Commissioner of Police.

The case has been adjourned to March 10, 2014 for continuation of trial.