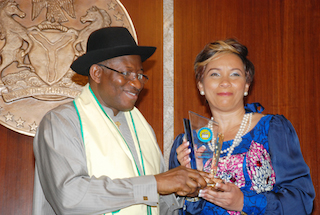 Ibinabo Fiberesinma, the national president, Actors Guild of Nigeria, AGN, has been appointed into the board of National Council For Arts and Culture, NCAC, by President Goodluck Jonathan.

The AGN President, in a short text message sent to our correspondent, said the appointment came as a surprise to her as she never expected it.

“I was shocked to hear of my appointment to that board by Mr. President. I was just doing my thing as the leader of the actors in Nigeria and didn’t know that some people are watching. This is unbelievable,” Fiberesinma said.


On 18 February, Fiberesima, who is the first female president, led about 80 members of her guild including past presidents, members of the Guild’s Board of Trustees and executives from 35 states, to pay a solidarity visit to President Jonathan.

During the visit, the president donated a plot of land for the building and a promise to assist in the erection of the guild’s headquarters in Abuja.

P.M.NEWS learnt Ibinabo and other members of the board have been sworn in during the inauguration which took place on Wednesday afternoon in Abuja.