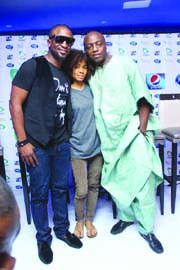 As the first episode for Season 4 of Nigerian Idol, TV reality music show, sponsored by Etisalat is expected to air on 1 March, contestants in turn hold their breaths as judges decide who makes the next stage. The auditions came to an end with a three-day session in Lagos last weekend.

Elvis Daniel, Head, Youth Segment, Etisalat Nigeria, said he was impressed by the brave spirit shown by the audition hopefuls.

“We look around and see how excited and determined they are. Many of them had tried last season and have improved their skills now. Etisalat is proud to provide a platform to discover and nurture raw talents. We will be cheering them on, as they compete with their vocal strengths and learn how to be creative enough to stand out,” Daniel said.

The audition train which kicked off in January moved through Benin, Calabar, Port Harcourt and Makurdi.

Last season’s winner, Moses Obi, who toured the country with the judges in search of the next Nigerian Idol was also impressed by this year’s turnout nationwide.

They were unveiled to the media on Wednesday 26 February at the Rhapsody’s Lounge, Victoria Island, Lagos.

The ultimate winner of the fourth series of Nigerian Idol will go home with a brand new SUV and N7.5 million among other rewards.