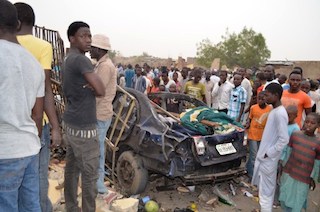 Suspected Boko Haram insurgents killed 29 people in Nigeria’s embattled Borno state, even after giving notice of the attack to residents and Nigerian soldiers.

The latest attack on Sunday — just a day after at least 85 were killed in three separate strikes — hit the town of Mafa in Borno state.

The militants had sent fliers to the town earlier in the week, warning of an impending attack, a tactic used by the extremists elsewhere in the region, said Borno Senator Ahmed Zanna.

Following the threat, some people fled, schools were closed and military reinforcements were deployed to the town roughly 45 kilometres (28 miles) northeast of Borno’s capital Maiduguri.

But when the attack began “the soldiers fled because they could not match the firepower and numerical strength of the gunmen”, Zanna told AFP.

“Twenty-nine people have been buried from the attack by Boko Haram,” he said.

Borno’s police commissioner Lawal Tanko confirmed the latest unrest and said units were headed to Mafa to assess the damage.

Statistics have typically been hard to verify, as much of the violence has occurred in remote regions, often with poor phone access.

More than 330 people have been killed already this year — a nearly unprecedented two-month rate for the four-and-half-year conflict.

More than 800 people were killed during fierce clashes between Islamists and the police in Maiduguri in 2009.

On Saturday, 35 people died when two bombs exploded in a busy district of Maiduguri and 39 killed about an hour later when gunmen opened fire on a nearby village with heavy weaponry.