Thumbs down for Jonathan over sack of Abdullahi 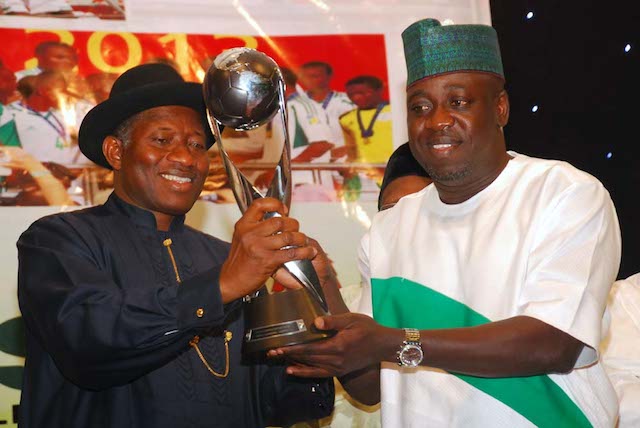 President Goodluck Jonathan shocked journalists, other members of the Federal Executive Council and guests at the swearing in ceremony of new Ministers on Wednesday when he swore in a new minister for sports.

Dr Tanumo Danagogo was announced as the new Minister of Sports by President Jonathan.

There was no indication that Bolaji Abdullahi, the former Minister who is also regarded as one of the most successful ministers to head the sports sector will be sacked before this morning.

The former Minister was not present at today’s FEC and it was not clear whether he kept away because he was informed that he will be dropped from the cabinet.

Bolaji had in just about two years he was in charge of the Ministry led the country to win laurels in football and other sports in and outside the country.

Under him, Nigeria won the African Nations Cup after more than a decade of repeated failure last year among other competitions. He is therefore regarded as one of the most successful Ministers in the cabinet of President Jonathan.

P.M. NEWS however gathered that with the defection of former Governor Bukola Saraki, from the Peoples Democratic Party to the opposition APC, the former journalist’s days in the Jonathan cabinet were numbered.

This was because is the Sports Ministers’ political godfather who also nominated him for the ministerial appointment.

It was also gathered that the Kwara State chapter of PDP had repeatedly complained that Abdullahi was not showing interest in the affairs of the party. It was learnt that PDP members had complained that the Minister refused to contribute fund for the organisation of a rally held to welcome defectors to PDP in Ilorin last Monday.

The rally was attended by President Jonathan and other big wigs of the PDP.

Meanwhile, the Kwara State chapter of the All Progressives Congress, APC, has described the sack of the sports Minister as a triumph of politics over excellence.

The APC in a statement in Ilorin on Wednesday by its state Publicity Secretary, Sulyman Buhari, said though Bolaji Abdullahi is not a member of the party, it said that as an indigene of Kwara state, the party was proud of his great achievements at the ministry of Sports.

“Though we concede that Mr. President reserves the powers to hire and fire, in the exercise of such powers, however, international best practices demand that excellence and competence should not be traded on the altar of politics”.

The APC lamented: “That a President could sack a performing Sports Minister three months to the World Cup speaks volumes of the quality of the Nigerian Presidency. This nature of politics is anti-people and anti-development.

“It bears repeating that the achievements of Mallam Bolaji Abdullahi are known to Nigerians and can hardly ever be captured by any book. As the Minister of Sports, he steered the ministry’s ship to stardom and catapulted the Nation’s sports sector to world class standard.

“Mallam Bolaji Abdullahi is the most successful Sports Minister in recent times and arguably the best Minister in Federal Executive Council, FEC. By this sack, the President Jonathan administration has lost what is remaining of its credibility.”